In Edinburgh, time is coming unstuck and the past is breaking loose. Best friends Kate and David are no ordinary kids. They are keys: powerful controllers of time.

With their powers the friends are forced into the middle of a war between the evil Lords of Chaos and the Guardians of Time. Can they prevent the barriers between times being blown away forever?

Enter a race against time in Chaos Clock and its thrilling sequel Chaos Quest.

'This time-slip novel is a great read: convincingly narrated with good characterisation, a plot full of mystery and suspense, and a palpable sense of history.'
-- Booktrusted

'Gill Arbuthnott knows just what a strange and alien place a museum can be and she exploits the other-worldliness to spine-chilling effect. An unusual, enjoyable combination of fantasy thriller and psychological drama with a warmly satisfying ending.'
-- The Scotsman

'A most engaging fantasy novel... Dynamic and satisfying.'
-- Sunday Herald

'An engaging tale of good against evil involving magic and touching on love, loss and sacrifice.'
-- Booktrusted

'If you enjoyed The Chaos Clock, this is a must-read sequel. It's exciting and gripping from beginning to end.'
-- Teen Titles

'Danger is never far away in this thrilling sequel.'
-- The Scotsman 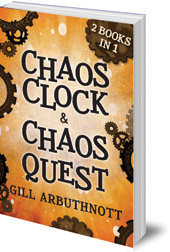