Dragonfire; The Wings of Ruksh; The Underground City

This is an ebook omnibus of books 1, 2 and 3 in the popular Dragonfire series: Dragonfire, The Wings of Ruksh, and The Underground City.

A year later, in The Wings of Ruksh, and Neil and Clara are on a dangerous journey of winged horses and snow witches.

Book 3, The Underground City, is a ghostly story set against the backdrop of the spooky Mary King’s Close in Edinburgh. 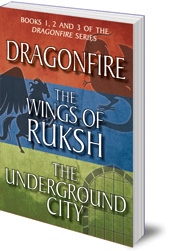