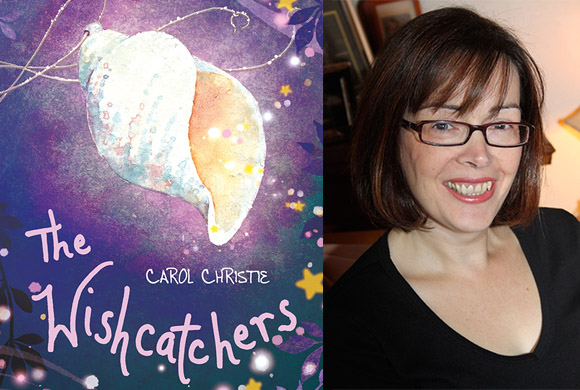 In case you missed it, here is the Book of the Month interview with debut author Carol Christie, who released her book, The Wishcatchers, earlier this year.

Q: What inspired you to write The Wishcatchers?
Carol Christie [CC]: One day I was walking along the harbour at St Abbs, in the Scottish Borders, and I saw a pile of lobster creels. I just started to wonder what would happen if you put wishes in them and dropped them out at sea – and that’s when the idea of The Wishcatchers popped into my head.

Q: How long did it take to write The Wishcatchers?
CC: I wrote three main drafts of The Wishcatchers and each draft took a few weeks to write – but in between there was lots of thinking time. It took about two and a half years from the day I first had the idea to the day the book was published.

Q: What were you like when you were in primary school?
CC: I was the kind of kid who would read the cereal packet if there wasn’t anything else to read. I was always reading and writing stories and poems – but I also really liked to play chasing games in the playground with my friends.

Q: Have you ever been picked on like Antonia in The Wishcatchers?
CC: I was lucky that there wasn’t a Rosie Brash in my class at school! But I think everyone has times when they feel other people are getting at them. People can be unkind, often without meaning to – and we can be unkind to others too, even to our friends.

Q: Who was your best friend in primary school?
CC: I don’t think I really had a best friend. There was a group of six of us who always played together. We even had a secret club, the LGs. I’m afraid I’m not allowed to tell you what LG stands for!

Q: Did you base the characters in The Wishcatchers on anyone you know in real life?
CC: Ant is her own person, as she would be the first to tell you, and not exactly like anyone else. However, there are some things she has in common with my own daughter and some of her friends – and she’s also a little bit like me. It’s very rare that I base a character substantially on a real person. Having said that, there is one minor character in The Wishcatchers who is a real person. I wonder if you’ll be able to guess which one it is after you’ve read the book? (Clue: we don’t ever actually meet him or her.)

Q: If you had three wishes what would they be and why?
CC: My first instinct was to wish to always be happy. But then I thought that if everything always went well, I wouldn’t learn much. It’s never fun when bad things happen to you, but often these are the times that make you better and stronger, so I don’t think I could really wish them away. Instead, I’m going to wish, like Rosie, that I could fly. I’d also like to be able to speak any language. And I’d love to live in a house that cleaned itself so I wouldn’t have to do it!

Guest Post: Sisterhood by Emily Ilett The Girl Who Lost Her Shadow The Girl Who Lost her Shadow is the stunning debut novel from Kelpies Prize…
What is a synopsis... ... and how do I write one? As part of the Kelpies Prize for Writing, we ask entrants to send…
The True Story of the Loch Ness Monster... Long, long ago, before Castle Urquhart was built, Loch Ness was much smaller than it is now, and no one…
Guest Post: Hannah Foley on life as a writer and a nurse We are immensely proud to be working with Hannah Foley, who is not only an author and illustrator, but is…
Guest Post: Searching for Unicorns by Lari Don Have you ever been surprised by a unicorn? In today's guest blog, Lari Don explains why Scotland has so many…
The Otherwhere Emporium: Read an Extract The Nowhere Emporium has returned. In the following extract, Daniel Holmes, the owner of the Emporium, has just finished writing…