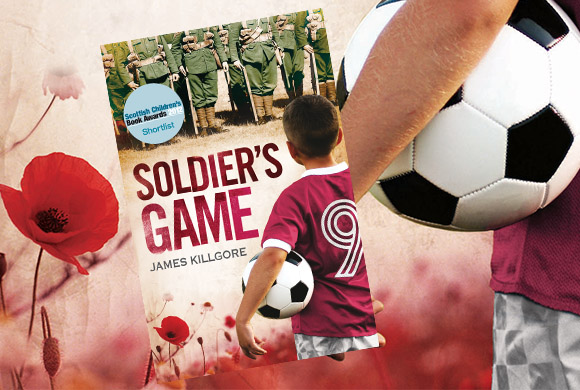 In case you missed it, here is the Book of the Month author interview with James Killgore. James released is book Soldier’s Game earlier this year.

Q: What inspired you to write Soldier’s Game?
James Killgore [JK]: It started out as a story that I made up for my footballing daughter about a young boy who sneaks into his granny’s attic and finds a pair of boots that belonged to his great-grandfather who was a professional footballer. When he wears them he finds he’s magically transformed into a champion striker.

That might have made a good story on it’s own but around the same time I picked up a book called McCrae’s Battalion by an historian called Jack Alexander. It was about a battalion of soldiers from Edinburgh who fought in World War I. Many were fans and players from the Heart of Midlothian football club. After that the two stories sort of merged in my head and the magical element just melted away against the grim truth of what happened to those soldiers.

Q: Why do you think that the story of the Hearts Battalion is important?
JK: I think it’s a very personal story. It’s easy to get caught up in tactics and statistics and weapons when studying major historical events like WWI. True stories like those from the Hearts Battalion bring home the sad consequences of war – right to our doorsteps. Sometimes as I walk across the Union Canal I imagine those young footballers – Harry Wattie, Jimmy Speedie, Pat Crossan – treading the same pavements, feeling the sun on their faces, unaware of what’s coming.

Q: Was it difficult mixing history and imagination in your book?
JK: Not as difficult probably as working straight from imagination. The great thing about writing historical novels is that much of the drama is ready made. You only have to bring it alive through characters – real and imagined.

Q: Did you have to change any of the historical facts to make sure that Soldier’s Game was a good story?
JK: I invented quite a few characters to tell the story but I tried hard not to change anything fundamental – just small facts. All of history is made up of countless small stories and most of those go unrecorded; that’s what makes personal diaries so valuable to researchers. Historical fiction allows you to imagine some of those missing stories.

Q: Which book would you advise all children to read before they grow up?
JK: I think Roald Dahl is just the best. I hadn’t read any of his books until I was a father and I think I enjoyed reading Charlie and the Chocolate Factory and George’s Marvellous Medicine as much as my kids did listening.

Q: Do you play football?
JK: Where I grew up the sport was American football – though now soccer (what they call football in America) is huge among kids in the States. I have kicked a ball about with friends but I don’t think anybody would call it real football! I do enjoy watching though.

Q: What’s the best thing about being an author?
JK: I suppose for me it’s a kind of grown-up version of make believe. You only get to live one life but in being a writer you spend a lot of time inventing and inhabiting other lives. I also like to read and research history and when you have a project like a book it gives direction to that. You feel you have a stake in it. In a sense you become part of the history just in writing about it.

Posted by Benedicte at Discover Kelpies