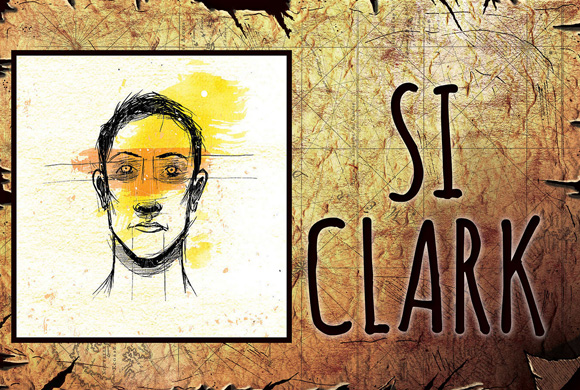 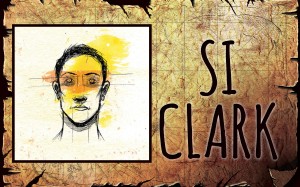 A few weeks ago, the team here at Discover Kelpies were thrilled to announce that three (yes, THREE!) of our lovely titles had been shortlisted for the 2015 Scottish Children’s Book Awards! The following week #FlorisDesign introduced you to the first of the three illustrators involved, the fantastic Luke Newell – illustrator of Attack of the Giant Robot Chickens. This week we’re continuing our SCBA showcase with Pyrate’s Boy illustrator, Si Clark, whose swashbuckling cover would make anybody’s timbers shiver!

Ahoy Si! Thanks for taking the time to chat to us today! We’re beyond excited to hear all about your inspiration for Pyrate’s Boy, did you find it easy to get started?

Yes, I really enjoy working on Pirate themed illustrations. I grew up playing the Monkey Island games on the PC in the 90s which have inspired my work a lot.

Quite a few of our illustrators have referenced video games amongst their inspiration so it seems we have a lot to thank them for! So what’s your favourite part of the Pyrate’s Boy cover?

I like the golden colour scheme, I think it fits well with the theme. And the illustrated parts of the book title.

We love the golden colours too, although our favourite bit might be the crossed swords! Now our readers may well be interested to know that you’re not only an illustrator but an animator as well. What made you want to illustrate and animate?

I’ve wanted to do both since I was about 8. The Monkey Island computer games I mentioned before (and others like Day of the Tentacle and Sam & Max) inspired me a lot (along with lots of other things along the way) so always knew what I wanted to do with my life.

It’s great to hear that it’s been a lifelong passion! So working in both illustration and animation must require quite different approaches, do you prefer to work digitally or traditionally?

My work is a mixture of both. All of the elements of my illustrations are either drawn or painted by hand or are textures that I have found and scanned in. I use Photoshop in my work as I like to have every element on a separate layer so I can make any changes very easily. With animation I either draw every frame or draw directly on the computer.

It’s interesting to know that both your illustration and animation work requires a bit of both. So do you have a favourite thing to draw or animate?

Yes, I like creating my own little worlds and making odd little creatures to inhabit them.

That sounds fun! We do hope you’ve created a pirate world! Now, this is something we ask all of our illustrators – what do you do if you get stuck or illustrators’ block on a brief?

I get ideas for things pretty quickly most of the time. But sometimes there is a project where it’s much harder to get the idea. If this happens I will just do as much research as I can on the subject and then go and do something else like house work or going to the shops, something to take my mind off the problem and then just wait for my unconscious to work it out and then the idea pops up in my conscious mind.

That sounds like a good solution! So do you have a favourite illustrator or animator?

I really love the work of animator/director Marc Craste, especially his short film JoJo in the Stars which is truly beautiful.

Thanks for pointing us in his direction – what lovely work! And finally, because you are both an animator and an illustrator, do you ever think about how your 2D characters would move and act if they were animated? Do the two disciplines compliment one another?

Yes, I think they work well together. Whenever I have ideas for characters then they are always moving about in my imagination. They are pretty similar professions. And yes, even when I’m doing an illustration they are normally of a scene in the middle of some action so the whole scene will be playing out in my head so I can stop the camera at the right point to get the rid composition. If that makes sense.

It does indeed, thanks again Si!

Si achieved a First in his Illustration degree at The Arts Institute at Bournemouth. To see more of his brilliant work you can visit his website, his Bright Agency profile page or follow him on Twitter.

Click on the cover for more info on Pyrate’s Boy and to use our exciting See Inside feature!

Are you Brave? Discover our Spooky Reads! Do you like scary stories? We do! Delve into our range of spooky reads, perfect for middle-grade readers (with something…
What is a synopsis... ... and how do I write one? As part of the Kelpies Prize for Writing, we ask entrants to send…
The Kelpies Prize for Writing and Illustration The Kelpies Prizes 2022 are now closed! Thank you to everyone who entered! Watch this space and follow us on…
The Otherwhere Emporium: Read an Extract The Nowhere Emporium has returned. In the following extract, Daniel Holmes, the owner of the Emporium, has just finished writing…
Guest Post: Hannah Foley on life as a writer and a nurse We are immensely proud to be working with Hannah Foley, who is not only an author and illustrator, but is…
The Boy with the Butterfly Mind: Blog Tour To celebrate the launch of The Boy with the Butterfly Mind, author Victoria Williamson has been busy in the blogosphere…