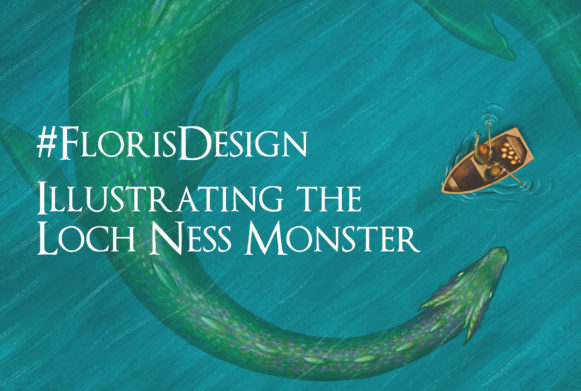 There have been enough stories, claimed sightings and tall tales about the Loch Ness Monster to fill the famous loch itself. But as an illustrator how do you even begin to attempt to capture the many and various images of Scotland’s most iconic monster that exist in the public imagination? In our latest #FlorisDesign interview we spoke to Nataša Ilinčić, about the joys and challenges of illustrating her debut picture book, The Treasure of the Loch Ness Monster.

Hi Nataša, thanks for talking to us today. Congratulations on illustrating your first picture book! How does it feel?

Thank you for having me! It feels exciting, like all new things! I’ve often worked on book covers and interior illustrations, but I’ve never illustrated a full story from beginning to end.  It’s a very different approach to illustration – one that I’m growing to love more and more.

Could you tell us a bit about yourself and your career so far?

I grew up in a small town at the foot of the Italian Alps, and spent all my summers on the Croatian coast, where my family is from. You could say I never really had roots in only one place, they always travelled with me! After finishing my studies in Archaeology and Cultural Anthropology in Venice, with a thesis in traditional Croatian tattooing, I decided to move to Scotland. I’ve been working as a freelance illustrator ever since.

I’ve worked on books, role playing games, posters (some of which you might have seen around Beltane Fire Festival) and I’m currently working on my first big personal project: an illustrated book about witches from various parts of the world and from different historical settings. 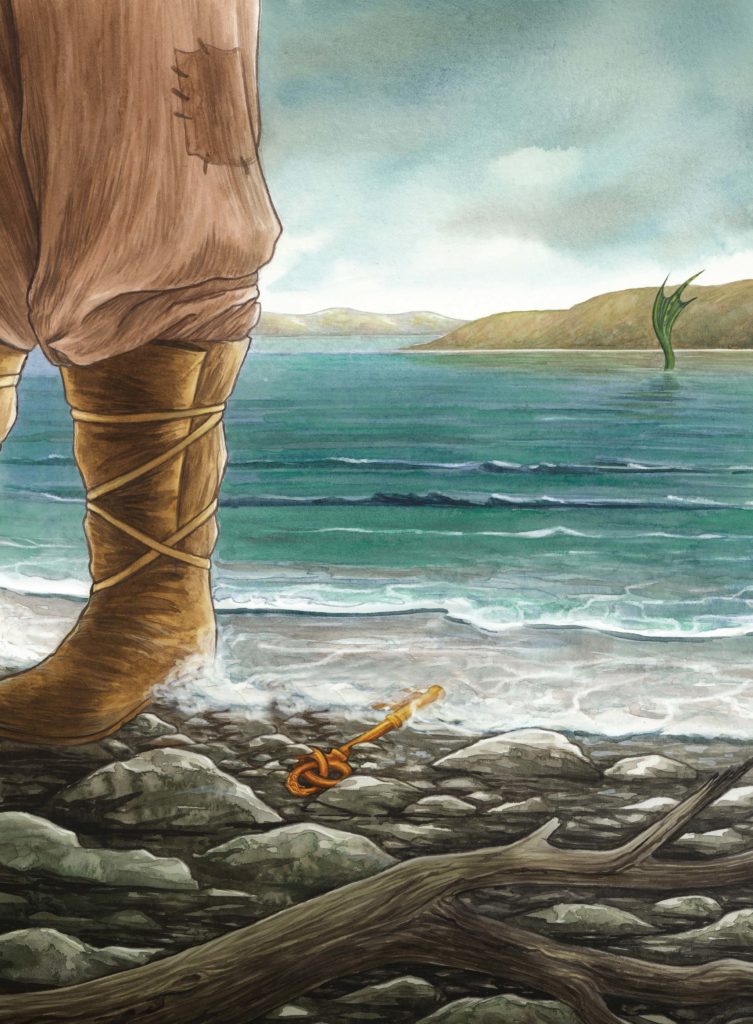 Is that a tail we spy?

What made you decide to become an illustrator?

There was never a ‘decision’ as such, it happened naturally, almost organically. I’ve painted since I was a little girl. Around the age of 20, I decided that my illustrations didn’t have to stay locked in a drawer, so I started posting them online. The intention was simply to share them with others, but not long later clients started contacting me. So I started working casually as an illustrator between archaeological digs. After finishing my studies I decided to start illustrating full time. I finally had the chance to invest all my time in improving my skills and doing what I love the most!

Is working as a picture book illustrator what you expected?

I approached the project with a very open mind, so I can’t say I had set expectations for it. A thing that pleasantly surprised me was the fundamental role of teamwork – having a talented storyteller like Lari Don writing the text, a brilliant editor, and an art director with a sharp eye made all the difference, and really elevated the quality of the book. 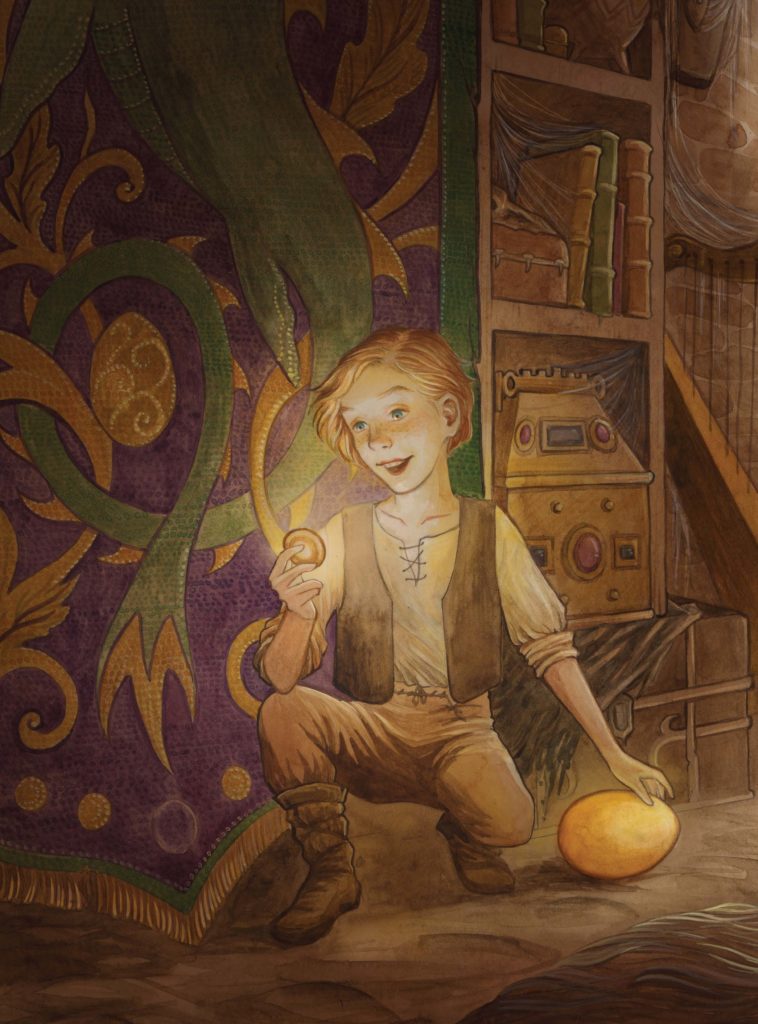 Can you tell us a bit about your illustration process and methods?

My illustration process always starts from the basics: pencil and paper. I sketch a lot and let my ideas flow free on the paper. As much as it is a mental process, it’s also a very physical one – sometimes your hand, your instinct, seems to be one step ahead of your mind.

When I isolate a good idea and settle on a composition, I procede by painting with watercolour and gouache, or sometimes waterproof ink. Towards the end I usually add some digital touches to the piece whilst trying to maintain the raw textures that the pigments created on the paper.

Watercolour is a very independent medium – it likes to create it’s own paths. That’s something that I really enjoy about it. Sometimes you control it, other times you let it flow freely, but mostly you just learn to guide it.

What did you enjoy most about working on The Treasure of the Loch Ness Monster?

Creating characters with strong personalities – which is often one of the most difficult but also most rewarding parts! Conveying Ishbel’s enterprise and curiosity, Kenneth’s caution and perkiness, and Nessie’s tenderness and maternal fierceness.

I also really enojoyed working on the historical aspects of the story, delving into Scottish history in order to convey the setting well (and maybe hide an Easter egg here and there…!).

Have you ever visited Loch Ness before?

Is it embarassing that I still haven’t? I spent countless hours studying its shores and the ruins of Urquhart Castle online to convey the setting of the story as accurately as I could, but I still haven’t found the time to explore that area of the Highlands. My partner and I are currently planning our summer trekking itineraries, so hopefully we’ll manage to fit Loch Ness in! 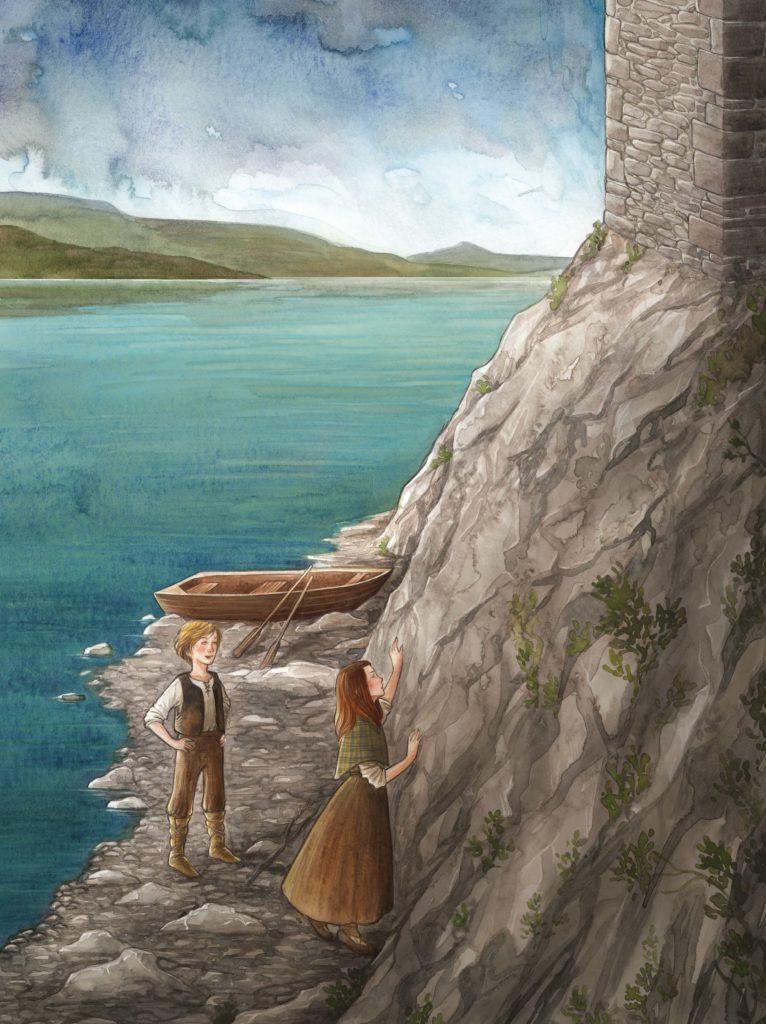 At the foot of Urquhart Castle.

What are your favourite things to illustrate?

I love illustrating pieces that evoke a sense of awe and mystery, that open a door and invite you in to help imagine the story behind it. Nature is omnipresent in my works, as well as European folklore and mythology. One thing I love most is using art and symbolism to explore the spiritual relationship between people and the wilderness.

Where do you get your inspiration? Do you have any favourite illustrators or designers?

Inspiration can be found anywhere! You can stumble upon it whilst reading a book; it can suddenly hit you whilst you’re walking in the woods, lost in your thoughts; or surprise you in the shower.

My latest piece Boundary Walker was inspired by an encounter I had with the fox that lives in our neighbourhood. I saw it in the evening, wandering around from one garden to the next – and when I woke up the next morning I knew exactly what I wanted to paint.

Aside from the evergreen Art Nouveau and Pre-Raphaelite painters, and masters of the Golden Age, there are also countless contemporary artists that inspire my work, such as P.J. Lynch, Tony DiTerlizzi, Brian Froud and Alan Lee. 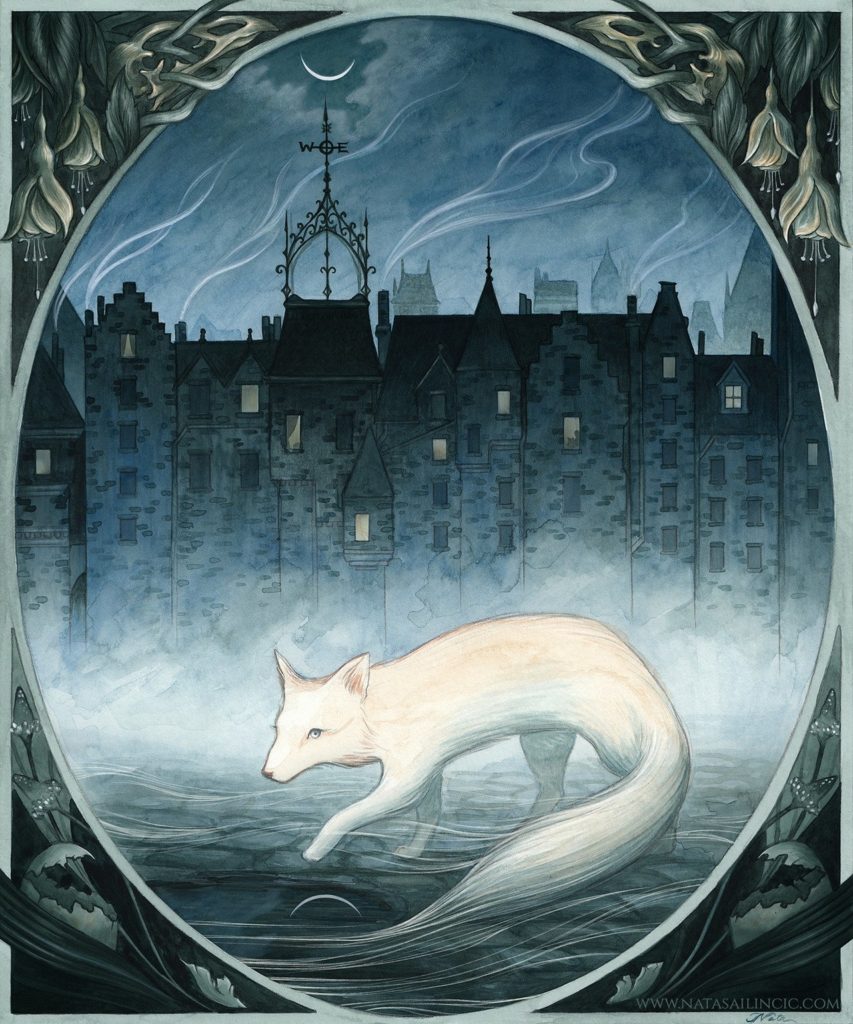 Do you have any tricks in your bag for when you get stuck on a brief?

There are a great deal of things that can help. I usually brainstorm ideas, letting the story play in my head various times, from different angles and points of view.

Never underestimate your brain’s ability to keep ideas running in the background. It’s a bit like trying to remember something – sometimes you just have to let the idea come to you instead of persistently chasing it. Go for a walk, chill, do something manual and tangible, actions that let your mind breathe a bit. It could be baking, tidying up, repotting that plant in the corner that keeps growing bigger and bigger…

What are your tips for budding illustrators?

In the age of social media, it’s easy to see only the success of others. What you often don’t see are the failures, the sleepless nights, the hard work. So when feeling low or experiencing doubt, try to be gentle with yourself and persist in what you believe in.

Remember that creativity doesn’t follow the rules of mass production. Don’t expect to be productive 24/7 or you’ll burn out. Creativity is very much like nature: between one spring and the other you need a period of dormancy to rest, gather your energies, recalibrate your ideas. 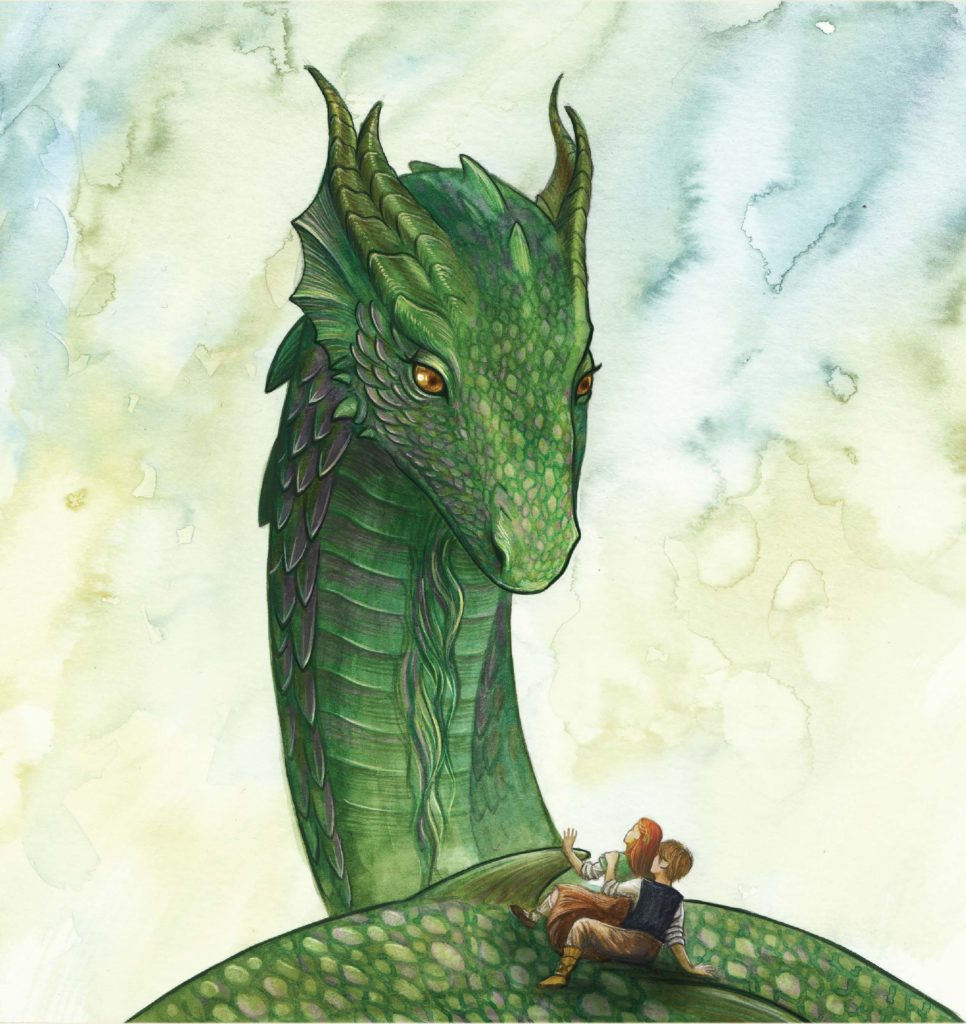 The Loch Ness Monster with Ishbel and Kenneth. 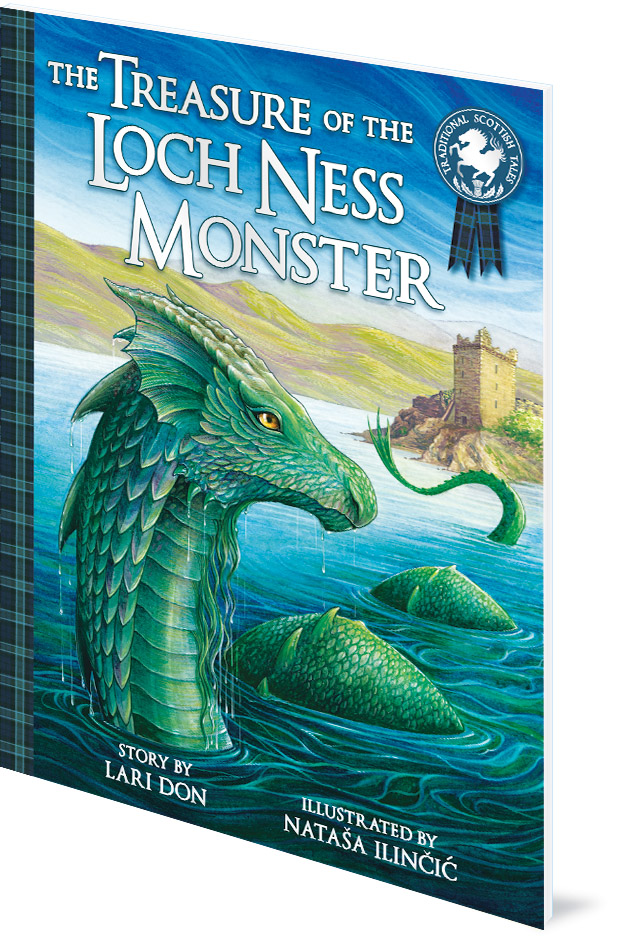 Nataša Ilinčić is a designer and illustrator originally from Bosnia and Herzegovina and now living and working in Edinburgh. She is particularly inspired by magic and folklore. The Treasure of the Loch Ness Monster is her first picture book. She was Highly Commended for the Kelpies Design and Illustration Prize 2017,

The Treasure of the Loch Ness Monster: Cover Reveal! Apparently 2017 was a record year for Loch Ness Monster sightings. We predict 2018 will be even better... We're so…
#FlorisDesign Illustrator Interview - Vanya Nastanlieva The Island and the Bear by Louise Greig is one of our latest Picture Kelpies published this Spring. The book…
What is a synopsis... ... and how do I write one? As part of the Kelpies Prize for Writing, we ask entrants to send…
Guest Post: Sisterhood by Emily Ilett The Girl Who Lost Her Shadow The Girl Who Lost her Shadow is the stunning debut novel from Kelpies Prize…
Guest Post: Hannah Foley on life as a writer and a nurse We are immensely proud to be working with Hannah Foley, who is not only an author and illustrator, but is…
Guest Post: Searching for Unicorns by Lari Don Have you ever been surprised by a unicorn? In today's guest blog, Lari Don explains why Scotland has so many…