It’s Only the End of the World

1. Charlie's parents aren't boring -- they're radical computer hackers
2. He's the opposite of ordinary -- thanks to the Atlas serum, which has made him basically a superhero (minus the spandex)
3. People are out to get him. And us. Apparently Charlie's the only one who can save humanity from MASS EXTINCTION.

With the help of a rogue AI and smart-mouthed Daffodil McNugget (yes, that's seriously what she's calling herself), Charlie sets out to stop Armageddon. And if he can't

It's only the end of the world. 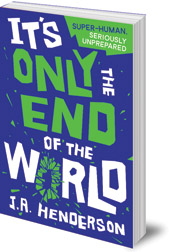