Jess thought the old tales of dangerous creatures living beneath the water were just crazy stories, until her friend Freya was stolen.

To rescue her Jess must capture one of them – a shapeshifter, a kelpie – but hes nothing like she imagined.

Finn sees her in ways that no one ever has. Not even Magnus, who’s known her all her life.

Caught between two worlds, Jess must choose between what she’s always known and what lies… Beneath.

'It's a story of agonising choices and heartrending consequences for the characters, gently told but emotionally gripping.'
-- The Scotsman

'Beneath was an enjoyable read with well drawn characters, and enough excitement at the end to keep reader's interest throughout the story.'
-- The School Librarian

'This is a gentle fantasy, related in formal, sometimes-heightened language that makes the most of the story's evocative setting.'
-- Kirkus Reviews

'I found this book a lot like another book I have read, but I thought Beneath was way better... My favourite character was Jess because she is quite mysterious, she doesn't give too much of herself away to people.'
-- Kelsey, Castlebrae Community High pupil, Teen Titles

'It is a book really full of details. The author uses a lot of imagination. It is also a kind of scary book. I would recommend this book to teenagers.'
-- Sofia, Castlebrae Community High pupil, Teen Titles 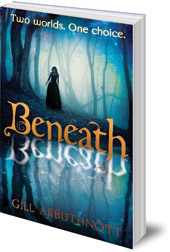