Best friends Kate and David are no ordinary Edinburgh kids. They are keys: powerful controllers of time. But their power won’t keep them away from trouble or out of danger.

Kate and David must race against time to stop the evil Lords of Chaos from tricking the Stardreamer into losing her power. Can they prevent the barriers between times being blown away forever?

The thrilling sequel to Chaos Clock.

'An engaging tale of good against evil involving magic and touching on love, loss and sacrifice. It is well-plotted with rounded characters and a satisfying ending.'
-- Booktrusted (www.booktrusted.com)

'If you enjoyed The Chaos Clock, this is a must-read sequel. It's exciting and gripping from beginning to end.'
-- Nathan, Teen Titles

'Gill Arbuthnott sets David and Kate's fantastic adventures against the backdrop of Edinburgh and the surrounding countryside, including a terrifying incident at Rosslyn Chapel. Danger is never far away in this thrilling sequel.'
-- Kathryn Ross, The Scotsman

'The Chaos Quest proves Gill Arbuthnott is no one-novel wonder. Folding a full-blooded "other" world into the very real-feeling living space of her teenage characters, Arbuthnott has created a fast paced fantasy thriller. A compellingly three-dimensional piece of fiction.'
-- Lindsey Fraser, The Sunday Herald 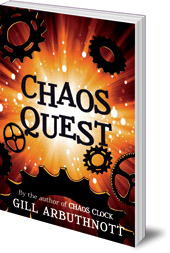