The Flight of the Golden Bird

This book is currently reprinting but can be pre-ordered now. It will be available again on 18 August 2022. Orders will be shipped as soon as the book is released.

Duncan Williamson, one of Scotland's Travelling People, has been celebrated as the bearer of Scotland's greatest national treasure: one of the richest troves of story and song in Europe. In this collection, he passes on some of these wonderful children's folk and fairy tales. For over sixty years Duncan travelled around Scotland -- on foot, then in a horse and cart, and later an old van -- collecting stories, which not only come from the Travelling People but from the crofters, farmers and shepherds he met along the way.

The Flight of the Golden Bird includes stories about silver horses and clever foxes, cunning lions and trilling nightingales, brave princesses and magic scarecrows, the four seasons and old Father Time. At the heart of each story is a lesson about life and what it means to be a good person. The stories have been written down as faithfully as possible to Duncan's unique storytelling voice, full of colour, humour and life.

'A delightful collection of tales that any child will love.'
-- Lothian Life

'Storytellers and those who enjoy reading aloud will find this an excellent resource filled with lively language.'
-- Kirkus Reviews 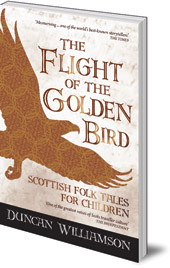 Duncan Williamson was born in 1928 on the shores of Loch Fyne. He was the seventh of sixteen children born to a family of Travellers, who set up camp in the same place every winter and wandered the Highlands during the summer, hawking their tin…

Linda Williamson was born in Madison, Wisconsin in 1949. She has a PhD from Edinburgh University, and is an American folklorist, storyteller and editor. She was married to renowned Scottish folk storyteller Duncan Williamson and has three children and five grandchildren — on both sides…