She had a stitch in her side and her legs were burning, but Dylan barely noticed. Her every thought was focused on Tristan running in front of her, and it took everything she had to keep up with him. Whenever he pulled ahead, the pain of their stretched bond reverberated around her body, and she had to force herself to pump her legs and pick up speed. Tristan reached their building a good few metres ahead of her, but Dylan was grateful. By the time she careered down the little path that led to the front door, Tristan had it unlocked and she was able to barrel straight through to the stairs.

They were nearly the death of her, but she used the handrail to haul herself up each step, each flight. By the time she’d reached their landing, though, Tristan was inside the flat. Dylan paused, leaning heavily on the railing, and stared at the open front door. Stars were exploding in front of her eyes and she thought she might topple over if she left the safety of the banister. She did it
anyway, wobbling across the landing into the flat.

“Tristan?” she gasped out. “Tristan, where are you?”

He appeared a moment later, a silhouette at the end of the hallway. His hands were clenched into fists, but because of the light streaming in from the living room behind him, she couldn’t see his face. She felt it, though, the ominous atmosphere that shrouded the flat. Something had happened, something bad.

“Is it here?” she whispered, lingering near the door, afraid to move. “Is the Inquisitor here?”

Tristan shook his head slowly and Dylan sagged against the wall with relief. That seemed to spur Tristan into motion and he walked down the hallway towards her. His steps were slow, measured. Reluctant.

“What is it?” Dylan asked. “What’s wrong?” Tristan didn’t answer. He didn’t say anything until he’d closed the remaining distance between them. Then he reached out for her. “Dylan—”

Something in the way he said her name had her dodging back, out of reach. He was being hesitant with her, careful. That frightened Dylan.

“What’s wrong?” she repeated. She shifted to the side slightly, trying to see further into the flat, but Tristan blocked her. “What is it?” she demanded. “What are you hiding?”

“Dylan—” Tristan gently took hold of her hands and tried to ease her backwards. “Let’s go and sit out on the step for a little bit, OK? We’ll just sit and—”

“No!” Dylan wrenched herself away from him. She set her feet and stared at him, willing him to see her determination. “Tell me what’s wrong. Has the Inquisitor been here?”

A slow nod. Tristan’s face was like stone, except for his eyes. They were pained, full of sympathy, of pity. Not for himself, she realised. For her. “What has it done? Has it done something to the flat?” No, as soon as she said it, Dylan knew that wasn’t right. Tristan wouldn’t act like that if it was only things, only belongings…

I’ll be beside you.
Every step until the last.

Dylan and Tristan have escaped death and conquered destiny. But their actions have caused an imbalance. The afterlife is owed two souls – and it wants them back.

Exiled from the world of the living, Dylan and Tristan face a loss worse than death: each other. Their love has got them this far, but can it survive a final heartrending sacrifice?

This is the stunning finale to the Ferryman series from multi-award-winning author Claire McFall, which has sold more than 3 million copies and been translated into 18 languages so far. Ferryman is to be adapted into a film by Legendary Entertainment, set to be directed by Kelly Marcel, script writer on Venom and Saving Mr Banks.

We’re incredibly excited that a Hollywood studio has optioned the Ferryman film rights. US production studio Legendary Entertainment has acquired the worldwide film and graphic novel rights to the series by author Claire McFall.Ferryman to Legendary press release FINAL 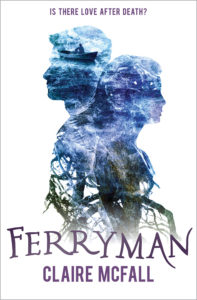 Legendary Entertainment is a leading media company with film, television and digital, and comics divisions. It has produced films including Godzilla and Jurassic World.

You can read the full press release here. Or, find out more about our exciting news on the Ferryman film rights in The Guardian, The Bookseller and Deadline.*

“Having Legendary take my book and tell me that they would like to turn it into a film is, quite simply, mind-blowing. Ferryman started as a scrap of an idea, based on a strange dream, and when I finished it, I was almost too scared to send it out into the world. I’m very glad I did. Holding the book in my hand, seeing my name on the front cover and my words inside, was an incredible moment. And from then on, it has been something of a roller-coaster ride.” – Claire McFall

A modern retelling of the ancient Greek myth of  Charon, Ferryman tells the story of a young girl called Dylan, as she emerges from the debris of a train crash. Dylan believes she is the only survivor. Instead, she learns that she is the only fatality – and is trapped in a dangerous limbo. Then she meets a mysterious boy named Tristan, her “ferryman,” sent to guide her through the wasteland and into the afterlife. But they fall in love with perilous consequences.

On its release, Ferryman won the Scottish Teen Book Award. It was also longlisted for the Branford Boase Award and nominated for the Carnegie Medal. When a Chinese edition was published in 2015, it became a national sensation.

Sequel Trespassers was published in September 2017, with a Chinese edition was also published by Beijing White Horse Time. In China the book immediately went to No.3 in the Open Book General Fiction bestsellers chart, alongside Ferryman at No. 6 in its 26th consecutive month in the Top 10, giving McFall two simultaneous titles in the national Top 10 fiction bestseller charts. 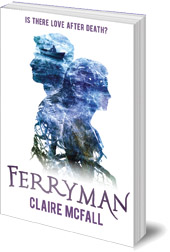 Dylan has escaped a horrific train crash unscathed. Except she hasn’t.

The bleak landscape around her isn’t Scotland. It’s a wasteland haunted by wraiths searching for human souls.  And the stranger waiting for her isn’t an ordinary boy. Tristan is a Ferryman, tasked with transporting her soul safely to the afterlife, a journey he’s made a thousand times before.

Can true love overcome the boundaries of death?

Ferryman is a thought-provoking and truly original story of a love that refuses to be limited by death. This stunning, award-winning debut novel has been  reissued to coincide with the publication of the eagerly-anticipated sequel, Trespassers.

*Please note that DiscoverKelpies is not responsible for content on external sites.