Visitors to the Scottish Writers’ Centre got a special treat at a recent ‘open mic’ night. They were some of the very first people to hear a preview of Victoria Williamson’s The Fox Girl and the White Gazelle.

The Fox Girl and the White Gazelle is a lyrical and aspirational story of finding ‘home’. Twelve-year-old Syrian refugee Reema and her Glaswegian neighbour Caylin form an unlikely friendship after they discover an injured fox. Their shared love of running brings them even closer together.

Author Victoria Williamson was on hand to read a scene taken from this book, written from the perspective of Reema. It takes place a few weeks after she has moved into Caylin’s tower block.

Under the grey Glasgow skies, twelve-year-old refugee Reema is struggling to find her place in a new country, with a new language and without her brother. But she isn’t the only one feeling lost. Her Glaswegian neighbour Caylin is lonely and lashing out.

Find out more about The Fox Girl and the White Gazelle. 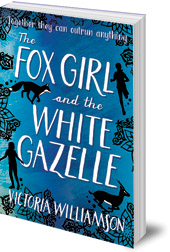 The Fox Girl and the White Gazelle is the debut novel from Glasgow author Victoria Williamson. It’s a beautiful, lyrical story of displacement and belonging from a powerful new voice in children’s fiction.

The Fox Girl and the White Gazelle will be published on 19th April. Pre-order your copy here.