Guest Post: How to Write a Mystery by David MacPhail

We all love a good mystery, and David MacPhail’s latest Top-Secret Grandad adventure, Death by Soup, is at the top of our to read pile. We caught up with David to get some top tips on writing mystery stories.

Without any ado whatsoever (because that would just slow the pace), here are my top tips for writing mystery stories:

1. It’s all about the characters 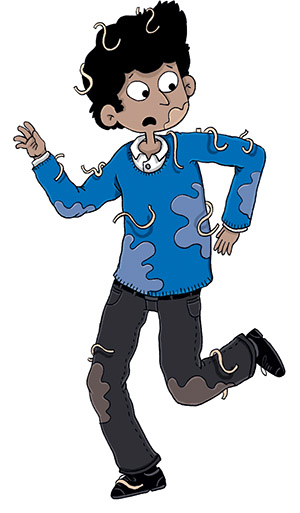 As with any story, it is your characters who drive the engine of the story.

At least one of your characters is up to no good: the villain of the piece! They’re trying to drive the story in their own direction. Why is your baddie acting this way? What do they want? What’s their motivation? Your baddie needs a good reason to be a baddie, so give them an interesting backstory. 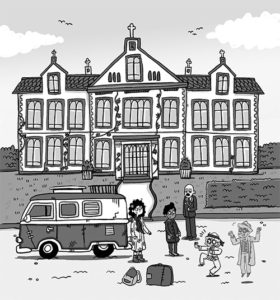 Plotting is massively important, but remember that plot comes from your characters – what they want, where they are going, and how they interact. Don’t get caught in the trap of plotting for plotting’s sake. What happens in the story, and how your characters respond, should be logical, natural and in character.

Pretend for a second that you are a stonemason. A master stonemason. Whether you’re building a cottage, a mansion, or a big and beautiful cathedral, you’ve got to have a plan. You’ve got to know how everything knits together, and though you are building from the ground up, you must know where all the building blocks are going to connect as you get higher and higher.

For Death by Soup, I created a huge mind map, by taping together 6 sheets of A4 paper. I drew little bubbles showing all the characters and where they fitted together. (I’d show you, but there are too many spoilers!) I had another big sheet with a timeline, showing where each of the characters were at every point. Putting together a detailed plot plan will flesh out your characters, iron out any kinks, and develop ideas. And, perhaps most importantly, it might help you avoid writing yourself into a corner. These things all help build the plan for your story.

3. Get into the mood

Setting can be very important. Death by Soup is set in a big old country house hotel. But it’s not everything. Death by Tumble Dryer is set in dreich old Glasgow. What I think is more important than setting is pace, suspense, and mood. The mood of Top-Secret Grandad and Me is humorous, but it’s also a little bit dark, with lots of folk being bumped off in weird and wacky ways.

Suspense is key! The footsteps in the dark, a shadowy figure in the bushes, a hand slowly turning a doorknob. Try to end every chapter on a cliffhanger so that readers want to keep reading. For really good writers at the top of their game, every page, every paragraph, nay, every sentence will lead you deeper into the story. 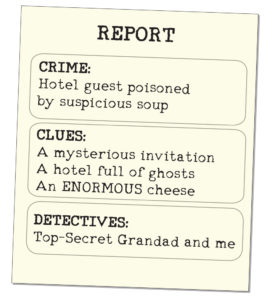 When writing your story, layer in your clues throughout. Be careful, they must be not too subtle and not too obvious. I like to hide my most important clues in plain sight, usually hidden in a busy comic scene or a flurry of other information. It might be something tiny, something a reader might not notice until later, when the main character plucks it out during the finale. Jay Patel may only be 11, but his main skill as a detective is that he notices things.

Red herrings are vital. Red herrings are clues that seem important but lead in the wrong direction. This is where you have to be not only a master stonemason but also a magician, using sleight of hand. That’s why you need to give all your characters backstory, even incidental characters. Give them secrets that your main character can uncover as he or she goes along. 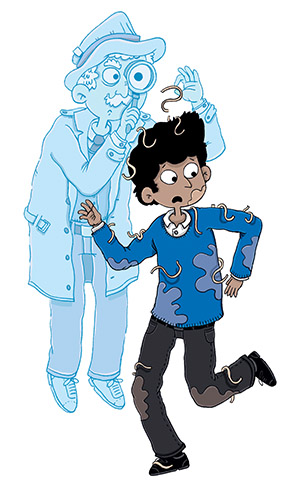 Does your main character need a buddy? Lots of famous detectives have sidekicks. For example, Sherlock Holmes had Doctor Watson. Sidekicks are good, they give the reader someone on their side. A sidekick can be someone the detective can talk to or argue with.

Grandad from Top-Secret Grandad and Me is a special sort of sidekick. Being a ghost, he is invisible. He can sneak around and poke his nose in places Jay can’t go! But he’s also a bit rubbish in that he hates walking through walls. He often gets mixed up, creating huge problems for Jay, like when he confuses cinnamon with cyanide! Quite often, Grandad has absolutely no idea what is going on. Like Sherlock Holmes, Jay is always many steps ahead of his sidekick!

If you’d like to know more about top-secret sidekicks, check out this post I wrote last year. 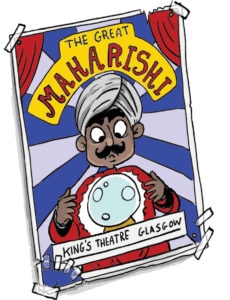 You must give your character a good reason to stick around. Jay Patel is a school boy, so does he really need to put himself in danger and solve mysteries? The answer is yes. In Death By Soup, Jay’s nosiness and his knack of being in the wrong place at the wrong time lands him in deep trouble, as suspicion lands on him. This means he has to act fast to solve the mystery. Jay also has a bigger mystery to solve. He’s trying to track down his missing father. Try and give your main character a ticking clock, a countdown, as this will really build suspense.

You need to give your readers a satisfying conclusion. Whether your hero or heroine is gathering suspects in a drawing room of a remote country house or swinging off the end of a crane on the banks of the Clyde, you need an ‘A-ha!’ moment. Your main character reveals all the clues, unmasks the murderer and ties up all the loose ends, allowing your reader to think back on all those tiny little nuggets of evidence that you laced through the story without them noticing.

And bingo! You have a story.

1. Get your kids to practice loading verbs, and killing off adverbs!

Thus the phrase: ‘Sam walked up the street, sadly,’ turns into: ‘Sam trudged up the street.’ Trudged is a more loaded verb than walked, and it covers sadly too. It’s a verb that says ‘sadly’.

2. Get kids to practice the age-old writer’s mantra of ‘Show, not tell!’

If Sam is suffering from grief, rather than saying ‘Sam was sad’ can he stop by a shop window and stare at his reflection in the window. What does he see in his own eyes? Perhaps a tear trickles down his cheek. Similarly, ‘Ray made his way up the stairs, angrily,’ could become: ‘Ray clenched his fists and stormed up the stairs.’

Since his dad literally did a vanishing act (he’s a magician!), Jay Patel has turned detective, and now, with the help of his ghostly grandad, he’s on a new case – a murder in a fancy country hotel where the cause of death appears to be – soup!

While Jay is surrounded by suspects, Grandad has his own informants – the ghosts haunting the hotel. But will they catch the killer before it’s too ladle?

David Walliams meets Agatha Christie in the soup-er second book of a new laugh-out-loud, weird-and-wacky mystery series for younger readers, by the author of Thorfinn the Nicest Viking.