Farewell Tour of a Terminal Optimist

Quick-witted, sharp-tongued Connor Lambert won't take it any longer: the bullying, the secrets, the sympathy. He's been dying from cancer for years, but hes not dead yet. He's going down fighting.

Forming an unlikely friendship with fellow juvenile delinquent Skeates, the pair stage a break out and set off on a crazy tour across Scotland -- dodging the police, joy riding and extreme partying -- to find Connor's dad, an inmate at Shotts prison.

But Connor's left two things behind -- the medication he needs to keep him alive, and the girl who makes living bearable.

A fresh and bold debut novel full of heart, guts and raw emotion. Farewell Tour of a Terminal Optimist is a brilliantly funny, thrilling exploration of friendship, identity and mortality populated with witty, sharply drawn characters. 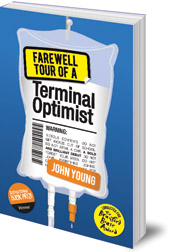 John Young is a writer who is originally from Belfast and lives in Edinburgh. A former lawyer, he founded and runs The Teapot Trust, a children’s art therapy charity, with his wife Laura. He was a Scottish Book Trust New Writer Award winner in 2013.