The Hill of the Red Fox

Thirteen-year-old Alasdair, living in London, knows nothing of this world. He can't wait to start his long summer holiday on the Isle of
Skye, away from his mother and aunt.

But things don't go quite as planned. On the journey, a stranger gives him a mysterious note before jumping from the train. Worse still, he instantly mistrusts sinister Murdo Beaton, with whom he's staying. Gradually adjusting to crofting life, Alasdair is not prepared for the web of danger and espionage that unfolds around him.

Allan Campbell McLean's classic thriller is as exciting today as it was fifty years ago.'
-- Jane Sandell, The Scotsman

'This is a boy's adventure book. It is set on Skye in Scotland and brilliantly brings to life the islands, countryside and people. It is nicely paced and the adventures in it are a cross between Enid Blyton and a young Bond.'
-- Sophie, age 13, Education Otherwise, June 2006

'Allan Campbell McLean set a standard for thrillers for young readers and The Hill of the Red Fox has stood the test of time remarkably wel.'
-- School Librarian, Summer 2006

'A magnificent adventure story. It recalls Stevenson and Buchan ... the reader should be swept away by the swift narrative, the splendid vision and the magical atmosphere of Skye which pervades the story."
-- Times Literary Supplement

'It is an espionage thriller strongly influenced by The Thirty-Nine Steps ... The crofting environment is integral to the action, with sympathetic descriptions of communal activities such as peat gathering, mackerel fishing and sheep shearing.'
-- Treasure Islands: A guide to Scottish fiction for young readers aged 10-14, Summer 2003

'One of my favourite childhood books ... this is an altogether superior spy story.'
-- Allan Campbell 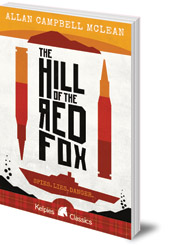 Allan Campbell McLean was born in 1922. After World War Two he wrote about his experiences of war in his pacifist novel The Glass House, and then turned his attention wholly to writing. He is the author of the children’s books The Master of Morgana, The Hill of the Red Fox, Storm over Skye and A Sound of Trumpets.