DiscoverKelpies > Meg with the Muckle Mouth

Meg with the Muckle Mouth

The Scotts and the Murrays were two warring families who lived along the Border between Scotland and England. Up until the seventeenth century the Clans who lived there raided and stole from each other and were known as Border Reivers.

The Scott family owned lands at Harden, Bowhill and Abbotsford, but at the time of this story their main home was Aikwood. The Murray family lived at Elibank Castle.

This tale is taken from The Fray of Ellibank by James Hogg (the Ettrick Shepherd) in which he tells us about Sir Gideon Murray and his daughter, Agnes. In Borders folklore Agnes is known as ‘Meg with the Muckle Mouth’. Perhaps she was given this name because she spoke up for herself…

Sir Gideon Murray lived with his family at Elibank in the Scottish Borders. At night when they sat down to dinner within the stout walls of his castle keep, the conversation often turned to the same topic – a husband for his daughter, Agnes.

One early spring evening, he told his wife, “I intend to seek out a man to propose marriage to our daughter.”

“How much will you pay him to take me?” asked Agnes.

“Hush,” said her mother. “That is not for a girl to discuss.”

“Why not?” said Agnes. “If I am to be sold then I should at least know the price of my worth.”

“It is no concern of yours,” her father told her. “Your parents decide upon a suitable person and a suitable dowry.”

“I cannot marry a man I do not know,” said Agnes. Cross, she got up from the table and walked to the window. From there she noticed something happening in the outer fields of their estate.

“You will marry the man I choose for you,” said Sir Gideon. “Else I will bring trouble to your door.”

She turned from the window to answer her father, “Trouble is already at the door.”

“I say you’d better mind your manners!” her father snapped.

“And I say you’d better mind your cattle,” Agnes replied calmly, “for there are reivers in the fields beyond the barnekin.”

“My kye!” Sir Gideon leapt up from the table. “I’ll warrant it’s Auld Wat Scott and his clansmen who are stealing my kye!”

He ran out of the castle, shouting for his men and buckling on his sword as he went.

“And there endeth the lecture on marriage.” Agnes said. 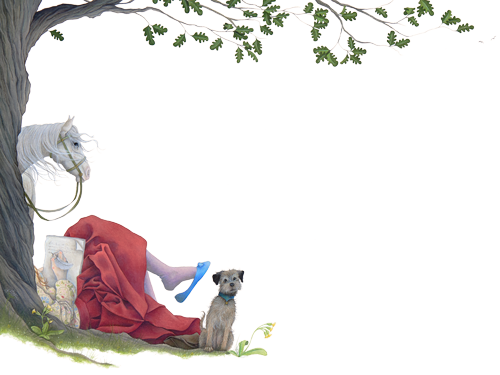 The next morning Agnes packed her saddlebag, led her palfrey quietly from the stable and rode to her favourite spot under a large oak by the banks of the River Tweed. There she set out pen and paper and started to do what she loved best: writing story poems.

“What are you doing?” said a voice close beside her.

Agnes gave a yelp of surprise. A young man was standing on the other side of the tree. 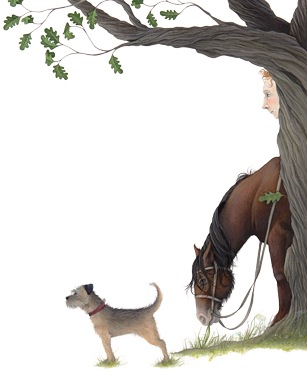 She was taken aback, but she was not afraid. “What are you doing here?” she countered.

“Watering my horse.” The young man waved his hand at his pony, which was further down the track, drinking from the river. “Although, you should have answered me first, as I asked my question before yours.”

“It is none of your business what I am doing here,” Agnes replied. “My family own the land I stand upon.”

The young man smiled and spread his hands. “In the Border Country, who owns what is always… debatable.”

Who is the handsome young man by the river? Will Agnes’ father find find her a husband, and more importantly, will she agree to marry him? Find out in An Illustrated Treasury of Scottish Castle Legends by Theresa Breslin and Kate Leiper.