There was once a girl called Kirsty MacLeod.

Kirsty often went out walking with Griselda the good, and on this day they went exploring the nearby ancient ruins of the castle of Clan Douglas in Bothwell.

Now, unknown to Kirsty or Griselda, a certain wily fox was spying on them as they wandered happily, enjoying their peaceful stroll together.

“Aha!” the wily fox muttered. “There is the little girl and goose who escaped my clutches before. That girl will not outwit me again. Third time will be lucky for me!”

And the wily fox crept after Kirsty and Griselda until he saw them enter the tower of the castle overlooking the River Clyde. Then he raced after them to stand in the doorway.

“I have you now!” The wily fox stood with teeth bared, blocking the exit.

“Please move aside.” Kirsty spoke politely, but she stared hard at the wily fox.

“No,” replied the wily fox, staring right back at Kirsty.

Kirsty recalled her previous meetings with this wily fox and she realised that she would have to think carefully once again. 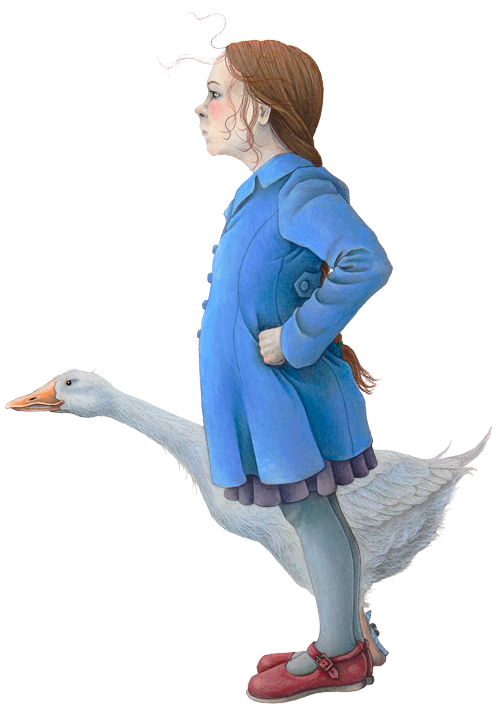 So Kirsty raised her eyebrows and said in a shocked voice, “I cannot stop to talk to someone I do not know!”

Kirsty smiled and, taking a step or two into the room, she said:

I am Little Miss Waxy, note,
In a white overcoat,
With hair that glows.
The longer I stand,
The shorter I grows.

“Oh, a riddle!” the wily fox exclaimed in delight, taking a step or two into the room. “I love riddles and I’m very good at solving puzzles. Foxes are exceptionally clever creatures; did you know that?”

“So I’ve heard,” said Kirsty, moving further into the room.

“Yes,” said the wily fox. “Story after story in fable and folklore shows the fox besting its rivals. We are renowned worldwide as the most intelligent of all the animals.”

Kirsty nodded as if agreeing, but noticed the fox was copying her actions, and had also moved further into the room…

Will the wily fox solve Kirsty’s riddle? Can Kirsty outwit him once and for all? Find out in An Illustrated Treasury of Scottish Castle Legends by Theresa Breslin and Kate Leiper.

PS. Did you solve Kirsty’s riddle? Scroll to the bottom to check your answer!

The answer to Kirsty’s riddle is: a candlestick! Did you guess right?