DiscoverKelpies > The Wizard of Stirling Castle

The Wizard of Stirling Castle

This story is part of the lore of Stirling Castle. Many centuries ago an incident took place at the ‘Ladies’ Lookout’ – a stone balcony high above what was the knights’ jousting ground.

A man called John Damian served King James IV as an alchemist. The Wizard Damian claimed he could create ‘The Philosopher’s Stone’, a much-sought-after substance that was believed to turn metal into gold. He also claimed he could make wings and fly.

He was challenged to make a trial flight, and in 1507 the court gathered on the castle walls and terraces to watch him take off… 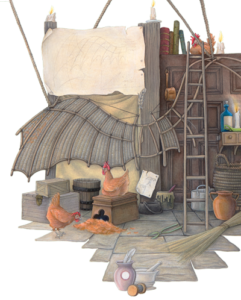 The King and Queen and courtiers gathered on the stone balcony known as the Ladies’ Lookout above the sward where the jousting would take place. Morna and Brodick, daughter and son of two of the courtiers, went too, for they wanted to watch.

When he saw the children, the wizard began to unstrap his wings made of bird feathers. “With these children here, I cannot jump from this balcony. They have called me a fraud and upset me completely. I am unable to proceed.”

“I insist that you do,” King James spoke to him firmly. “I will send the children away.” And he ordered Morna and Brodick to go down to the tournament ground. 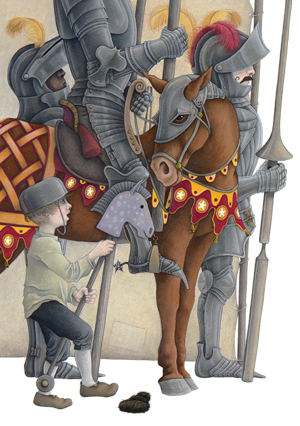 Wizard Damian gave Morna and Brodick a look of triumph.

The children were bitterly disappointed. As they opened their mouths to beg to be allowed to stay, the King raised his hand for silence. “You will have the best view of the result from there,” he told them quietly. “And I am giving you a task to do. I wish you to construct a soft landing-place under the castle wall for Wizard Damian.” He looked directly at Morna and Brodick and, to their astonishment, the King of Scots closed one eye and winked at them.

On the sward below Stirling Castle, the knights were preparing to joust. The children picked their way carefully, as the droppings from dozens of horses were scattered across the grass. They held their noses to avoid breathing in the horrible smell of steaming manure.

“Why do you think the King winked at us?” Brodick asked Morna.

“It was when he said we should make a soft landing place for the wizard,” Morna replied.

“Or,” Morna finished the sentence, “…some other soft substance as may be lying about the ground.”

And looked down at their feet.

Will Wizard Damian’s flight be successful? And what will the children use to make a soft landing-place? Find out in An Illustrated Treasury of Scottish Castle Legends by Theresa Breslin and Kate Leiper.