Clara and Neil have always known the MacArthurs, the little people who live under Arthurs Seat, in Holyrood Park, but they are not quite prepared for what else is living under the hill. Feuding faery lords, missing whisky, magic carpets, firestones and ancient spells … where will it end? And how did it all start?

Set against the backdrop of the Edinburgh Fringe and Military Tattoo this is a fast-paced comic adventure, full of magic, mayhem and mystery … and a dragon.

'For a debut novel, this is brilliant... The pace is fast moving, very readable and at times very funny... A well deserved addition to any school collection.'
--Janette Perkins, School Librarian Journal,

'... a diverting read which, refreshingly, mocks the convention it's written in. Anne Forbes has a vivid imagination which she has put to good use.'
-- Carousel, The Guide To Children's Books 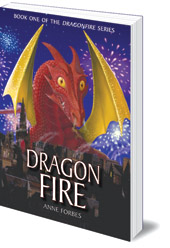