Range: Kelpies eBook 136 pages ISBN: 9781782500865 Publication date: 20th March 2014
Genres: Adventure and Thriller, Historical Theme: Scottish Folklore Ideal for ages: 8, 9, 10, 11 and 12 Classic Kelpies series
When Finn Learson staggers out of a stormy sea into a village on the Shetland Isles, he brings a secret with him. While the other villagers are enchanted by the stranger, Robbie suspects he's hiding something. Haunted by tales of the Selkie Folk, Robbie sees the clues everywhere -- the strange coin, the missing ship, Finn's love for Robbie's sister and her golden hair. But can Robbie convince the others in time to save his sister?

'I feel sure there's no more magical yet believable scene in literature than the lead-in to the final battle of A Stranger Came Ashore, as the straw-clad Guisers of Up Helly Aa dance from home to home in the green glow of the aurora borealis. But for me, the most wonderful and true moment of the book happens when Robbie manages to hold and feel the furnace-like heat of a baby seal. A Stranger Came Ashore, like all Mollie Hunter's books, is stunning in its blend of local tradition and belief, legend and life.'
-- Elizabeth Wein, The Guardian, What are the best Scottish children's books?

'Mollie Hunter's books have stood the test of time and it's a joy to have a new edition of A Stranger Came Ashore ... First published nearly forty years ago, Mollie's story remains as intriguing and beguiling as ever.'
-- The Scotsman

'A fantastic, gripping tale based on the traditional Scottish legend of the Selkie Folk, and set on the beautiful, windswept Shetland Isles. Floris Books should be congratulated for making Mollie Hunter's book widely available again -- they are perennial favourites and deservedly so.'
-- Scottish Children's Books, Winter 2002 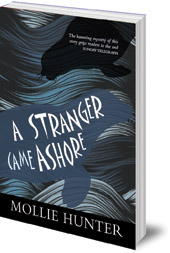