On the eve of his return to Scotland, Lewis Grant is dared to spend the night at the haunted desert oasis of Al Antara. But things dont go according to plan and on Lewis subsequent arrival in Edinburgh, strange things start to happen.

Set against the spooky backdrop of Mary Kings Close, Neil and Clara MacLean find themselves embroiled with the enigmatic Lewis, frightened ghosts, reckless bank robbers and a very cranky djinn.

Enjoy a third outing for the MacArthurs and their dragon, as monsters and mayhem return in a breathtaking tale of magic and nightmare.

'A lively tale of magic for younger readers.'
-- The Scots Magazine, July 2008

'I thought that the book was both adventurous and fantasy. It was very enjoyable and entertaining. It was too exciting to put down... I had my little sister read the first chapter, when I checked on her she was already reading chapter four!'
-- Billie Ferguson, Forrester High School, for Teen Titles Magazine

'The book was both magical and realistic... my little brother is 11 and he loved this book.'
Andrew Small, Forrester High School, writing for Teen Titles Magazine 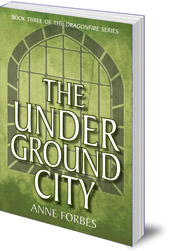