The Battle to Free Scotland

Against overwhelming odds, William must rely on courage and cunning to secure victory. Action-packed, historically detailed and beautifully illustrated, this Traditional Scottish Tale brings to life the story of William Wallace,
one of the great heroes of Scotlandâs Wars of Independence, and his famous triumph at the Battle of Stirling Bridge

'There are other historical books by illustrator Teresa Martinez including Mary, Queen of Scots: Escape From the Castle, and Robert the Bruce: The King and the Spider, and if children have enjoyed those books they would probably enjoy this as well.'
-- Youth Services Book Review

'This picture book spins a tale involving thirteenth-century Scottish outlaw/warrior William Wallace and the historic Battle of Stirling Bridge… Created with firm, craggy lines and appealing colors, the illustrations will help viewers imagine the period setting as well as the characters' emotions. Though the book is available only in paperback, its stiff cover seems sturdy enough to withstand a good many circulations. And given the perennial popularity of historically costumed men wielding swords and pikes and defeating their enemies (fairly bloodlessly here), this volume will surely find its audience.'
-- Booklist

‘Teresa Martinez is gifted at conveying the mood of each scene as well as details of period and landscape.’
-- Roaring Reads on Robert the Bruce: The King and the Spider

‘The real star here are the gorgeous illustrations by Teresa Martinez that grace every page and complete the story.’
-- San Francisco Book Review on Mary, Queen of Scots: Escape from the Castle 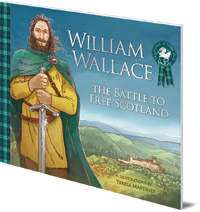