Robert the Bruce: The King and the Spider

The King and the Spider

Inspired by the spiderâs determination, the rebel king returns to the fight for Scottish freedom -- and victory at the Battle of Bannockburn.

The much-loved legend of the king and the spider, and Robert the Bruceâs victory in the Scottish Wars of Independence, are beautifully brought to life in historically detailed illustrations.

'What I enjoyed most about this book was the message that if you do not first succeed, you should always try again... This is such an important message for young children to see that sometimes you have to try many times before you are successful. I can see this story being used to open up dialogue on this topic... Perfect.'
-- Youth Services Book Review, 5 stars

'Enriches the legend for readers of all ages -- from children encountering the story of the King and the Spider for the first time, to those for whom it is a familiar cornerstone of culture... Teresa Martinez is gifted at conveying the mood of each scene as well as details of period and landscape. We especially enjoyed hunting for a spider deftly hidden on each spread.'
-- Roaring Reads 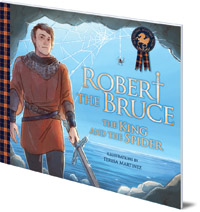