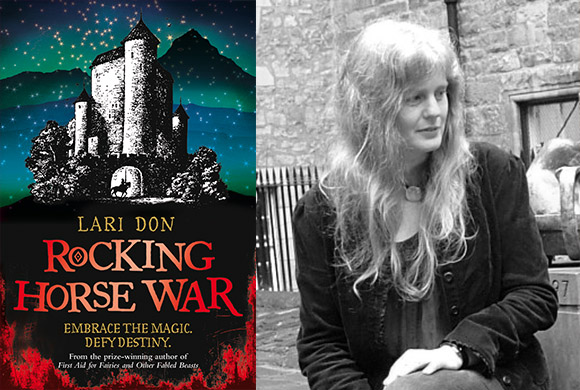 Just in case you missed the Lari Don author interview which was posted at the release of her new book Rocking Horse War, here it is again. The questions were based on those asked by pupils from Pitlochry High School in Perthshire and Abbeyhill Primary in Edinburgh.

Q. Did you always want to be an author?
Lari Don [LD]: I certainly always wanted to write. I used to write plays and ideas for film scripts when I was younger. So I think I always assumed I would write, but I always thought I would do it when I was old and wrinkled and sitting in a rocking chair. But I’m really pleased that I’m doing it now, when I’m still able to dash about the place, researching locations all over Scotland, and talking to readers in schools and libraries and bookshops!

Q. What inspired you to write Rocking Horse War?
LD: My two daughters demanded that I tell them a story about horses, and I was trying to think of a horsey story that didn’t have gymkhanas or magic talking animals in it, and suddenly I saw this picture in my head of a pale gleaming horse looking at its reflection in a pool of water. I knew that it was gleaming with varnish, not with grooming – it was a wooden horse. I also knew that the person looking at it was someone who was searching for some missing children. I immediately wanted to write about that person, and this horse, and that’s how Rocking Horse War started to come alive in my head.

Q. Why did you decide to write a book set in the past and what was so special about the 1920s?
LD: I didn’t really DECIDE to set it in the past, it’s just that when I started to write about the missing children and the wooden horses and the Perthshire landscape, it didn’t feel like now. It felt like longer ago. And I picked the 1920s because the children have all been affected by the First World War. It did cause few problems though — the heroine Pearl has to wear a dress the whole time, rather than jeans and trainers, but she still manages to climb trees, walls, cliffs and mountains!

Q. How long did it take to write Rocking Horse War?
LD: It took less than a year to write, but a lot longer to tidy and edit and get ready for other people to read!

Q. How many books have you written?
LD: So far, I’ve written 3 novels, two picture books (The Big Bottom Hunt is out and I hope another one will be published next year), two retellings of old stories (Tam O’Shanter, already published, and a retelling of a Sumerian goddess myth, which will be published next year) and I’m right in the middle of writing the next First Aid book, which I hope to finish this year.

Q. Who is your favourite character from all of your books?
LD: That is a really difficult question. I like the characters who don’t always do what I plan for them, so I’ve always really enjoyed writing Yann, the centaur in First Aid and Wolf Notes. But I think my absolutely favourite character of all is Emmie, the missing sister Pearl searches for in Rocking Horse War, because when Pearl found her, Emmie turned out to be much more interesting (and less easy to control) that I had ever imagined. I enjoyed being with Emmie so much, that I’ve written an extra chapter from her point of view.

Q. Which one of your books is your favourite?
LD: That’s another REALLY difficult question. I love all my books, for different reasons! And Rocking Horse War is particularly special to me because I invented an entire mountain range for it, and filled it with some of the wildest, weirdest and least predictable characters I’ve ever written. And I really didn’t know if they would all make it out alive… But my truly favourite book is always the one I’m writing at the moment, so right now it’s the third First Aid book (set on the North Coast of Scotland, with lots of caves and cliffs and sea monsters!)

Q. How do you decide what the cover looks like?
LD: I don’t! The publishers find an illustrator and ask them to do a cover which lets readers know what kind of book it is. I do get to look at the suggested cover, to see if it fits with the facts of the story, and to let the editor know if I like it, but I don’t actually choose the cover or the artist. I do love the cover of Rocking Horse War though — it manages to have mountains, darkness, castles, horses and that really rather scary red at the bottom (fire? blood?) and link them all together to say “ADVENTURE!” in a really brilliant way.

Q. What is the best thing about being an author?
LD: I love spending time in the stories, getting to know the characters, putting them in terrible danger and then working out how to rescue them. I also love the way the story changes and takes on a life of its own as I write it. But I also love the other half of a writer’s job – going out and meeting readers, hearing what you think of books and stories, and helping you bring your imagination to life too!

Q. What would do you if your rocking horse came alive?
LD: Given what I know about the violent and unfriendly rocking horses in my story, I’d probably run and hide! Or else I’d call Pearl and Emmie, as they have now got plenty of experience with rocking horses, and get them to come and rescue me.