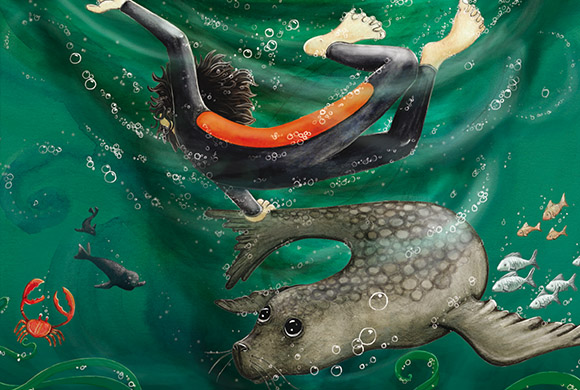 To celebrate the release of Magnus Fin and the Moonlight Mission, the latest book about half-selkie (part-human, part-seal) hero Magnus Fin, we had a seal-themed launch at Deep Sea World, North Queensferry, and got to meet the real thing!

Author Janis Mackay met North Queensferry Primary’s P5/6 at Deep Sea World last Tuesday to launch her new book. Before North Queensferry arrived Janis and I took the chance to have a sneaky look aound the centre and check out all their amazing underwater tunnels. We were really excited to see the sharks – with their GIANT teeth – and we particularly liked the cool stonefish. But what we really wanted to see were Deep Sea World’s resident seals – Heather and Morag. Luckily we got there in time to see them being fed.

Then North Queensferry arrived. Janis talked to them about the Magnus Fin books, the environment and, of course, seals! Janis set a challenge to see if anyone could name five different kinds of sharks. There were loads of great answers – did you know that there is such a thing as a Nurse Shark! – but Janis didn’t think that ‘Jaws’ counted!

Afterwards North Queensferry went to visit Morag and Heather while Fiona from Deep Sea World told some fun facts about seals. It was rather rainy and the seals didn’t seem to want to show their faces but they stuck their heads out at the end so everyone got to meet them.

Janis and I had a great time with our selkie/seal themed launch at Deep Sea World. Maybe you could visit Morag and Heather soon too!

Posted by: Chani at Discover Kelpies