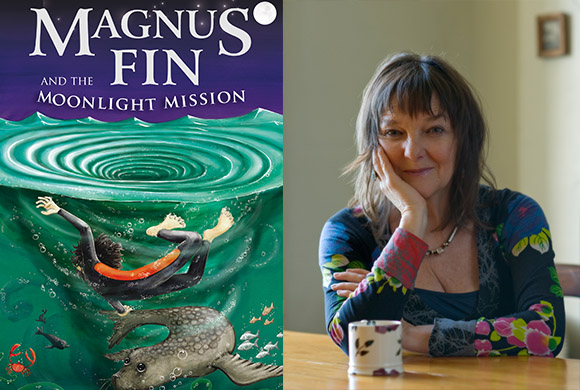 In case you missed it, here is the Book of the Month interview with Scottish author and storyteller Janis Mackay, whose new book Magnus Fin and the Moonlight Mission, was released in February. Her new book is the exciting sequel to Magnus Fin and the Ocean Quest, featuring Magnus Fin the half-selkie (part-human, part-seal) hero.

Q. How did you become an author?
Janis Mackay [JM]: I’ve always liked writing. I have written poems and short stories and had them published, but I suppose being an author means having a book published. Magnus Fin and the Ocean Quest was the fourth book for children I had written – but the first to be published. So I suppose winning the 2009 Kelpies Prize made me an author!

Q. What inspired you to write Magnus Fin and the Moonlight Mission?
JM: I already felt very close to Magnus Fin, Tarkin and Aquella and I felt that Magnus Fin had a few more adventures inside him. Also, I live by the sea and one day I was walking along the beach and saw some dead seals. I felt so sorry for those innocent and lovely creatures who live so close to us and have to suffer because of our rubbish, and also because some people still kill seals, thinking they eat ‘our’ fish. I suppose I wanted to write on behalf of those creatures who have no voice to speak with.

Q. Who is your favourite character from the Magnus Fin books?
JM: At first I think Tarkin was my favourite. He is very free and unusual and quirky and I like that. Then Miranda was my favourite in a mystical selkie way. But I have to say Magnus Fin. He is a bit shy but he is also brave. He is sensitive and cares about animals – and he wants to enjoy his life and make a difference, not hurt people.

Q. How long did it take to write Magnus Fin and the Moonlight Mission?
JM: Quite a long time. I wrote the book, then re-wrote it, then wrote it again, then edited it, then edited it again. Probably a year in all.

Q. Do you plan out all of your stories in advance?
JM: When I first began writing I didn’t know what the next sentence would be until I wrote it. I think that is a good way to write, certainly when you begin writing. I plan a little bit now and try to strike a creative balance between planning and being spontaneous. Writing is an amazing thing. You can plan clever things then somehow as you write the story seems to be telling you to do something else. That is why writing is exciting.

Q. What was your favourite book and who was your favourite author when you were a child?
JM: I used to imagine I was that girl in Mallory Towers who used to sit in the attic of her boarding school and write stories in secret. I did read a lot of Enid Blyton!

Q. The Magnus Fin books are full of cool sea creatures. Which one is your favourite?
JM: I’ve seen whales in California and Scotland and I think they are mysterious. But of course I love seals. I live close to them and have seen them on the beach as pups. I have looked into their eyes and heard them sing. I watch them swim. I would have to rate seals as my favourite creatures.

Q. Magnus Fin’s friend Tarkin can’t swim. Is there anything that you can’t already do that you’d like to learn?
JM: I’d like to sing well, and cook a good meal, and climb mountains, and speak fluent French. There are lots of things I can’t do, but I also know it takes a lot of practice to do certain things – like play the piano for instance. Mostly I want to write really well, and that I suppose is what I practice most.

Q. What is the best thing about being an author?
JM: There are lots of wonderful things. One is creating characters who come alive. Although I spend most of the day on my own writing, I feel I am in great company. Another wonderful thing is meeting children for whom Magnus Fin and the gang are real.

Q. Magnus Fin is half selkie. If you could be any supernatural creature, what would you be?
JM: An angel!