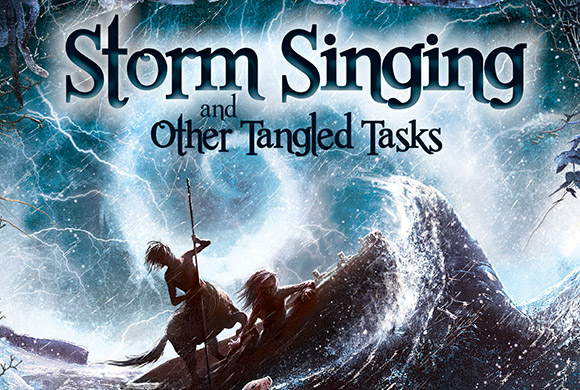 In case you missed it, here’s the Book of the Month Author Interview with Lari Don. Lari released her latest book in the First Aid for Fairies series earlier this year.

Q: What inspired you to write Storm Singing and Other Tangled Tasks

Lari Don [LD]: Quite a few readers (including my own daughters) wanted another book with Rona the selkie so I decided to set the next book around her home and colony, and once I decided that, the story started to come together.

Q: Do you plan all of your stories in advance?

LD: No. Not at all. That would take most of the fun away. I like to set up situations and see what my characters do. I usually know roughly what I expect to happen in the next few chapters, but there is always the chance, the hope, that my characters will surprise me and take the story in a different direction, which is great fun.

Q: Which one of your books is your favourite?

LD: Aaaargh. This is the hardest question I’m ever asked, because I love ALL my books. But my favourite book is always the one I’m in the middle of writing, because I don’t know how it’s going to end. And if you want to know what book that is, see the next question!

Q: Will you be writing another book in the First Aid for Fairies series?

LD: I am already! The first was set at the winter solstice, the second at the summer solstice, the third at the autumn equinox, and the fourth will then be at the spring equinox. And I have a few scenes and a lot of scribbles already. But I’m not giving away any more details yet.

Q: Are the locations in your books based on real places?

LD: Yes. The named places like Dunvegan in Wolf Notes or Smoo Cave in Storm Singing are based on real places which I’ve visited and drawn diagrams of and taken lots of notes about. You can go yourself and see if I’ve got them right! But even the places which you can’t visit yourself (because they don’t exist!) are based on places which I know, or even most often on a combination of places joined together and put exactly where I need them for the story. And I draw maps of EVERY scene, so even the made up places are totally real in my head!

Q: Do you ever run out of ideas?

LD: NO! I’ve got a head, and a whole bag of notebooks, filled with ideas. The one thing that I am having a little trouble with is that I have run out of places in Scotland that I know to set my magical adventures. So I am running a competition to get some suggestions from YOU! You can read all about the Set the Scene Competition (and the brilliant prizes) here!

Q: Your books have pretty unusual titles, how do you think them up?

LD: Sometimes the title arrives with the idea, like First Aid for Fairies and Other Fabled Beasts, which was the title from the very first chapter, and Rocking Horse War, a title that never changed as I was writing the book, and helped shape the plot. But the other two novel titles Wolf Notes and Storm Singing, took a bit longer, and a lot of writing of lists and tossing ideas around.

Q: Some of the most important characters in your books are fabled beasts. If you could be any kind of fabled beast what would you choose and why?

LD: I’ve never been asked that before! I think I’d like to be a shapechanger, like Rona, or like Sylvie in Wolf Notes. But I’d like to be able to change into any animal I wanted. A cat when I was tired and wanted to curl up on the couch. Or an osprey when I wanted to go and research a location. A shapechanger, who could turn into any animal I chose, then turn human again, so I could write about it!

Q: If you weren’t an author what would you be?

LD: Very unhappy, because I have the best job in the world!

Posted by Benedicte at Discover Kelpies

What is a synopsis... ... and how do I write one? As part of the Kelpies Prize for Writing, we ask entrants to send…
Guest Post: Sisterhood by Emily Ilett The Girl Who Lost Her Shadow The Girl Who Lost her Shadow is the stunning debut novel from Kelpies Prize…
Are you Brave? Discover our Spooky Reads! Do you like scary stories? We do! Delve into our range of spooky reads, perfect for middle-grade readers (with something…
Guest Post: Searching for Unicorns by Lari Don Have you ever been surprised by a unicorn? In today's guest blog, Lari Don explains why Scotland has so many…
The Selkie Girl and the Otter King In the Western Highlands of Scotland, where three lochs meet - Loch Alsh, Loch Duich and Loch Long - there…
Guest Post: Hannah Foley on life as a writer and a nurse We are immensely proud to be working with Hannah Foley, who is not only an author and illustrator, but is…