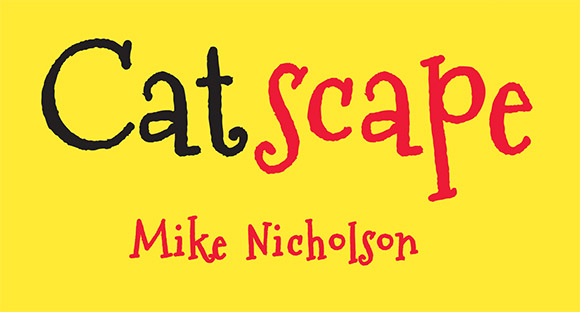 In case you missed it, here’s the interview with Mike Nicholson, author of Catscape.

Q: What inspired you to write Catscape?

Mike Nicholson [MN]: I wanted to write a mystery adventure story, like the ones I would lose myself in when I was younger. When I saw three lost cat posters on lampposts near my house, I felt that I had a mystery on my own doorstep which I could turn into a story.

Q: Do you have a favourite character in Catscape?

MN: I probably like Murdo best. He can be a bit overenthusiastic but that can also make him quite comical and his actions always lead to something happening.

Q: How did you choose the setting for Catscape?

MN: The setting was easy to find as it was literally on my doorstep in Comely Bank in Edinburgh where I used to live. I used the real streets of Comely Bank Avenue and the main street in Stockbridge, Raeburn Place. That made the story easy to write because I was so familiar with walking around those streets and could really picture the scene. I did add in some extra twists to the area though, so it’s not totally accurate.

Q: Have you always wanted to be an author?

MN: I had always liked writing at school but I didn’t have ideas for a book until I was in my early twenties. Even after that it took me another ten years to get organised and do anything about it.

Q: What’s the best thing about being an author?

MN: I really love it when you have some different subplots and you suddenly see how they are all going to join together. I tend to write in scenes which I know will play a part in the story rather than writing them in order. It’s like having chunks of a jigsaw made and then realising that it’s time to bring them together.

Q: Are you working on a book at the moment?

MN: I have some very early ideas that I am playing around with. Hopefully like Catscape one simple idea can turn into a whole book.

Q: Which character from Catscape would you most like to be?

MN: When I am aged 80 I would like to be Jessie; still very active and karate kicking my way through life.

Q: Did you base any of the characters on someone you know in real life?

MN: I worked with a very larger-than-life character once who I think influenced some of Murdo’s behaviour. Fergus is a bit more inclined to hang back and observe things rather than rush in, and that’s more like me.

Q: What is your favourite animal and why?

MN: I like small dogs. That’s why Jock is in the book. He’s a bit like Snowy in the Tintin stories, often at the heart of the adventure.

Q: Did you enjoy solving mysteries when you where Fergus’ age?

MN: I loved reading mystery stories, particularly The Three Investigators, The Hardy Boys and Tintin books. I think if you like these types of story then you usually end up trying to solve them as you go along, but if the writer is clever enough they manage to keep some things hidden and then surprise the reader.

Q: Do you like gadgets? What’s the best gadget you’ve ever had?

MN: I’m not really a gadget person, but I do remember very clearly getting my first digital watch. It wasn’t actually that exciting as it told the time and date and had a light and that was it. I think I invented The Databoy in Catscape as the watch which I wished I had got instead.

Q: Apart from Catscape, which book would you advise all children to read before they grow up?

MN: Holes by Louis Sachar. There’s a mystery, there are great characters, danger and adventure and an intriguing story from the past. I love the way the different strands of this story all come together.

Guest Post: Sisterhood by Emily Ilett The Girl Who Lost Her Shadow The Girl Who Lost her Shadow is the stunning debut novel from Kelpies Prize…
What is a synopsis... ... and how do I write one? As part of the Kelpies Prize for Writing, we ask entrants to send…
Greyfriars Bobby – Reimagining a Legend In this guest post, author Michelle Sloan discusses how she went about reimagining a world-famous Scottish legend for her brand…
Are you Brave? Discover our Spooky Reads! Do you like scary stories? We do! Delve into our range of spooky reads, perfect for middle-grade readers (with something…
The Baby Red Squirrel Rescue Activities The Animal Adventure Club, Isla, Buzz, Gracie and Lexi are always keen to learn more about the environment and the…
Guest Post: Searching for Unicorns by Lari Don Have you ever been surprised by a unicorn? In today's guest blog, Lari Don explains why Scotland has so many…