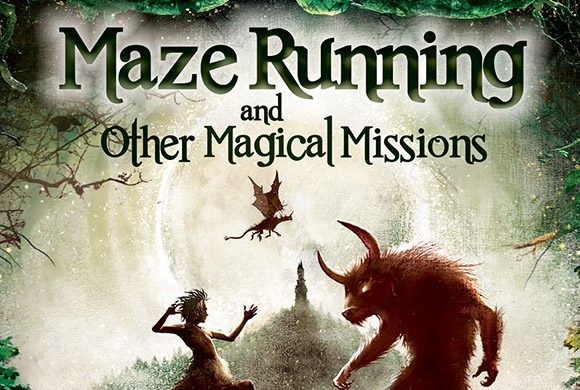 In case you missed it, here’s our interview with Lari Don, author of Maze Running and Other Magical Missions.

Q: Maze Running and Other Magical Missions is the last book in the Fabled Beasts Chronicles, how does it feel to finish the series?
Lari Don [LD]: It feels very strange. I miss the characters already. I usually enjoy reaching the end of a book, but this time it felt like I was saying goodbye, which was very sad. But I hope I’ve given them all a good send off!

Q: What will you write about next?
LD: There are lots of stories growing in my head just now. I’m not planning to write more books in the Fabled Beasts Chronicles, but I do have a few ideas for the world of the series, so I might return there, once I’ve explored the other stories which are calling to me.

Q: What is the weirdest thing you’ve had to do while researching these books?
LD: The weirdest was asking a vet how to heal a dragon for First Aid for Fairies. By the time I was doing Storm Singing I was a bit smarter, so I spoke to seal experts and fish experts, but didn’t admit I was researching selkies and mermaids until the end of the conversations! The most dangerous thing I did for Maze Running was almost getting blown off a cliff in Cromarty when I was researching a quest in winter gales. I was only saved by falling into barbed wire!

Q: How did you decide which characters appeared in each of your books?
LD: Helen and Yann are in all the books, because they’re the core of the stories, and so is Lavender because she is both very wise and very easy to injure! Rona and Catesby weren’t in Wolf Notes, to give me room to bring in new characters. But Rona fans told me how much they missed her, which is why she was such a vital character in Storm Singing. The main First Aid team were always going to come back together for the last book, but Yann had built up strong friendships with Lee and Tangaroa, so I thought they’d want to help too. I hadn’t intended to involve Sylvie, but she turned up anyway and just stared at me with those wolfy eyes until I gave her a job.

Q: Who is your favourite character from the Fabled Beasts Chronicles?
LD: That should be a hard question, but it isn’t. My favourite character is Yann. He’s brave, loyal, honest, arrogant and very good at kicking in doors. He may not seem like my favourite, considering what I do to him in Maze Running, but I love writing about him. Though I’m not sure he’ll ever forgive me for leaving him out of all the quests in the last adventure!

Q: Some of the most important characters in your books are fabled beasts. If you could be any kind of fabled beast what would you choose and why?
LD: I’ve never been asked that before! I think I’d like to be a shapechanger, like Rona, or like Sylvie in Wolf Notes. But I’d like to be able to change into any animal I wanted. A cat when I was tired and wanted to curl up on the couch. Or an osprey when I wanted to go and research a location. A shapechanger, who could turn into any animal I chose, then turn human again, so I could write about it!

Q: If you had to choose your favourite book from the series, which one would it be?
LD: It’s impossible to choose. I love First Aid for Fairies because it was my first book, I loved writing the duel in Wolf Notes and the fight with Yann in Storm Singing. And I still can’t believe what I did at the very start and the very end of Maze Running, so I love it too. I can’t decide between them, because in some ways they are all one story for me.

Q: What is your favourite place (real or imaginary) that you used in the series?
LD: I read a scene from Storm Singing to an audience inside Smoo Cave in Sutherland, which was an amazing experience. Tam Linn’s Well and Rackwick Bay mean a lot to me. And Traquair Maze was the winning Set the Scene entry, suggested by Emily Wright, so that’s been a great inspiration too.

Q: In Maze Running you brought back the Master of the Maze, the baddie from First Aid for Fairies. Why did you bring him back rather than baddies from the other books?
LD: Mostly because I didn’t think he’d been vanquished quite thoroughly enough the first time! Also because I felt I owed Yann a chance to take him on again, hoping for a different outcome.

Q: Do you have a message for Fabled Beasts Chronicles fans that have read all the books?
LD: Thank you all so much! I have had such wonderful support from readers, telling me what they’ve enjoyed about the books, asking questions, making suggestions, telling me quite bluntly which characters I had to bring back. So these are your books too. I hope you’ll enjoy whatever I write next just as much!

Author Interview: Lindsay Littleson If you know anyone moving up to high school after the summer you may well want to introduce them to…
#FlorisDesign meets Kate McLelland From wee lassies to midgies and nessies, Kate McLelland has illustrated many Kelpies books. Now she's launching a new picture…