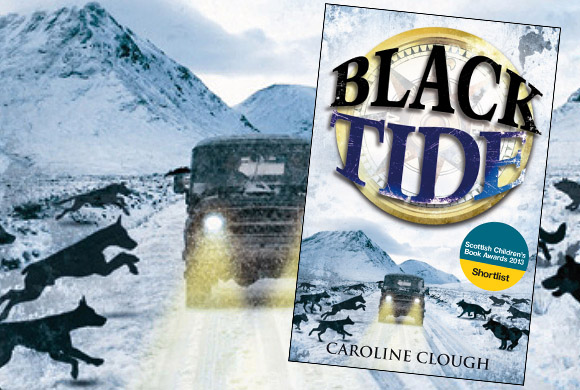 In case you missed it, here’s the author interview with Caroline Clough, author of the thrilling post-apocalyptic Black Tide and Red Fever.

Q: What inspired you to write Black Tide?
Caroline Clough [CC]: When I came to the end of writing Red Fever I was really sorry to say goodbye to Toby and his family. I really wanted to know what happened to them next! I didn’t know then where they were going to end up though they were supposed to be heading for Orkney. After visiting many schools and talking to hundreds of pupils who all wanted to know what befell Toby next too, I knew that I had to write the next adventure; Black Tide.

Q: What was it like writing a sequel?
CC: It was very hard as my editor wanted the sequel to be able to be read by children who hadn’t read Red Fever, as well as those that had. This meant that I couldn’t assume that the reader knew all about Toby and his friends and family and neither could I keep referring to things that had happened in Red Fever. The easy bit was creating a new set of dangers and adventures as Toby struggles to survive in the post-apocalyptic world. I had great fun inventing new characters such as Tash, Toby’s new friend, and the evil General with his fierce henchmen, the raiders. I especially loved writing about Snowy, the wolf-dog who comes to Toby and Tash’s rescue just when things look bleak.

Q: Have you always wanted to be an author?
CC: Yes, very much so. I thought I was going to be an author from a very early age, and when, at the age of fourteen, I was runner-up in a national writing competition I thought my path in life was assured. However, my plans got way-laid somewhere and I ended up as an animal behaviourist! It wasn’t until many years later that I came back to writing fiction and now am busy following that avenue and really loving it.

Q: What’s the best thing about being an author?
CC: It is a wonderful life being an author. I am so lucky to be able to decide how to organise my days; every day is different. One day I might be writing about Toby and the mad world in which he lives, another day I might be out and about researching the places he is travelling through on his latest mission, and yet another day I might be sitting in my garden thinking of another set of stories for younger children which I am currently writing. But probably my best days are those I get to go and visit a school to talk about my books. I love meeting my readers who are all so enthusiastic and happy to chat and ask lots of questions. Meeting young people is a real privilege that comes with being an author — it helps to keep me young and inspired about my writing!

Q: Toby travels all over Scotland in Black Tide. Did you do any research to help you write about the different locations?
CC: Yes — in Red Fever the story was based in the North East of Scotland around where I have lived for thirty years so I didn’t need reminding of those places. However, with Black Tide although the locations were known to me, I wanted to go and capture their atmosphere in my mind. This meant that my husband and I spent some brilliant weekends touring Scotland to visit those places. I took pictures and made notes so that when I sat down to write about them, I knew exactly how they felt, smelt and looked like. It was important to me to recreate them accurately so that my readers could get a feel for the places and see exactly where the action all takes place.

Q: What is your favourite part of Scotland?
CC: That’s a very difficult question to answer! There are many places all over Scotland that have very special memories for me and my husband and family. One of those is Achiltibuie where the mountains sweep down to the white beaches and into the blue sea. It always seems to have better weather than we do here in Aberdeenshire! However, this is a beautiful area to live in too. I’m only ten miles from the sea, and there are dozens of castles and historical buildings and amazing walks. However, sometimes the weather can be rather daunting!

Q: Why did you include menacing dogs in your books?
CC: I knew from my work as an animal behaviourist that if human control was taken away from dogs, such as after the red fever had killed most people, then they would revert to natural wolf-like behaviour such as hunting in packs. I wanted the dangers in my books to be realistic and likely to happen after an apocalypse. I wanted my readers to be able to relate to the fears that Toby and his friends were feeling. Also I think that as humans we still have a primal fear of wild dogs from our days as hunters living in the pre-civilised times. Who doesn’t have shivers running up and down their spine when they hear a wolf howl, even if it is only on the TV?

Q: Apart from Black Tide and Red Fever, which book would you advise all children to read before they grow up?
CC: There are two really — the first one is Wind in the Willows by Kenneth Grahame, which is not only a gripping good adventure but also is hilariously funny — what a fantastic character Mr Toad is! The other one is Kidnapped by Robert Louis Stevenson — a great adventure too but much darker and scarier. I re-read it every few years as it too goes all over Scotland and many Scottish readers will know the places described.

Q: If you had to survive in a post-apocalyptic world, what three things would you like to have with you and why?
CC: Firstly I would like to have my family with me – does that count? Not just for the obvious reasons such as I would miss them if not, but also because each of them has some wonderful talents which would be necessary to survive in this apocalyptic world. My husband is a mountaineer in his spare time and so would be great at taking us safely over mountains when we had to escape any bad men, and he can read a map! My son is a Queen’s Scout so he would be good at making fires and building shelters! And my daughter is fab at organising things and she would be great at keeping the supplies in and making sure we had enough food and fuel. Apart from them I would like to have an endless supply of paper and pens so that I could fill the time with writing even though there would be nobody left to read it! And lastly — could I have a warehouse full of thermal undies — it would be very cold in Scotland without electricity!

Q: If you had to invite three famous pirates to dinner (real or fictional) who would you choose and why?
Definitely Captain Jack Sparrow — not only is he very cute but he is very funny and I think he would liven things up as long as he didn’t drink too much rum and fall asleep! Captain Pugwash — he was always my favourite pirate on the TV when I was young. He always seems to get into terrible scrapes and still be very funny! Captain Bluebeard — he sounds like a horrible man but maybe he has just had bad press? He’d be very interesting at least as he had travelled all over the world and been in lots of dangerous situations. And if we didn’t like him we could always make him walk the plank!

Author Interview: Lindsay Littleson If you know anyone moving up to high school after the summer you may well want to introduce them to…
#FlorisDesign meets Kate McLelland From wee lassies to midgies and nessies, Kate McLelland has illustrated many Kelpies books. Now she's launching a new picture…