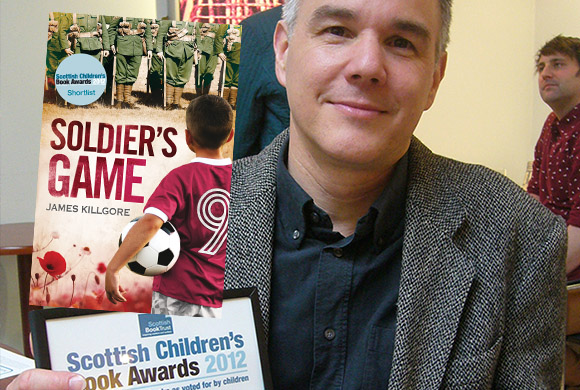 On World Book Day, 7 March, the Discover Kelpies team set out for Dundee to attend the 2012 Scottish Children’s Book Awards Ceremony. It was a very special day for us, as one of our favourite Kelpies books, Soldier’s Game by James Killgore, was shortlisted for the award in the Younger Readers category, along with Jonathan Meres with The World According to Norm and Cathy McPhail’s Out of the Depths.

James on stage in the Caird Hall

The ceremony took place in the stunning Caird Hall, filled with over 1000 school pupils (that’s a lot!) as well as other guests, coming to cheer on the authors. James had a lot of fun chatting to fans and signing copies of Soldier’s Game before the ceremony started and then we were in for a real treat. Pupils from St. Joseph’s Primary in Bonnybridge performed a short dramatisation of the three books in the Younger Readers category. The actors were all fantastic and all three plays were really fun to watch. For the Soldier’s Game performance, they even played a bit of football!

For the Bookbugs category there was even more entertainment! Julia Donaldson and her husband Malcolm did a musical version of Jack and the Flumflum Tree and everyone joined in on the very catchy chorus! When Catherine Rayner read Solomon Crocodile, a massive crocodile (cardbord, not real!) crept around on stage. John Fardell got great help from the audience to write a new book on stage, with the same storyline as The Day Louis Got Eaten. 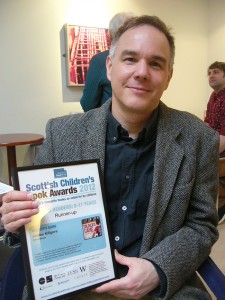 The authors in the Older Readers category were interviewed on stage. We found out that Barry Hutchison’s favourite pie is horsemeat pie (yum?), Elizabeth Laird loves travelling and Elizabeth Wein is very good at dancing Gangnam Style (she even showed us)!

The nailbiting moment when the winners were announced arrived! The whole of Caird Hall held their breath as the envelopes where opened and the names of the winners read out, to much applause. The winners were (drum roll please!) John Fardell and The Day Louis got Eaten, Jonathan Meres with The World of Norm and Barry Hutchison and his book The 13th Horseman!

Massive congratulations to all the winners and the shortlisted authors and a very well done to all the pupils who read and voted for the books!

If you would like to find out more about the awards, the shortlisted authors and the winners, you can visit the Scottish Book Trust website.

Posted by Benedicte at Discover Kelpies.