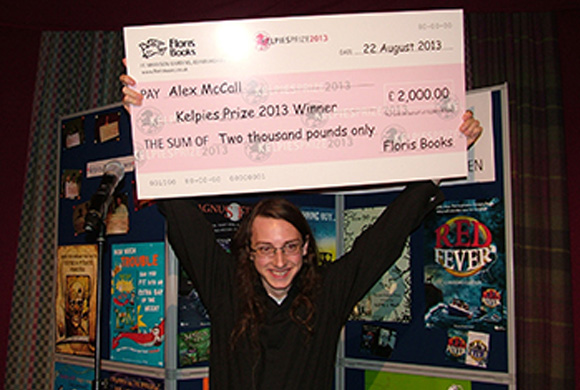 The wait is finally over!  After weeks of anticipation, we can now announce that the winner of the Kelpies Prize 2013 is… Alex McCall, with his eggscellent story, Attack of the Giant Robot Chickens!

Not one to count his chickens before they hatch, Alex attended the Kelpies Prize 2013 award ceremony on Thursday, along with his friends and family, where the winner was announced.  It was really difficult for the judges to choose between Attack of the Giant Robot Chickens and the other shortlisted books, Never Back, by Barbara Henderson, and The Great Moon Mission, by Shona McQuilken.

As Alex’s name was announced, a huge cheer erupted from the crowd – his family and friends certainly weren’t too chicken to show just how pleased they were.  When he reached the stage he was presented with a giant cheque (which we thought was very fitting for a story about giant chickens).  The prize was presented by well-known author Vivian French, who has published well over 200 books, including the Tales from the Five Kingdoms series.

All three books were praised by the judges for their eggsciting and original storylines but there could only be one winner, and Alex’s tale of giant robot chickens causing chaos on the streets of Aberdeen and ruffling feathers amongst terrified residents really stood out as a funny and exciting adventure story.

We can’t wait for Alex’s book to make it into the shops next spring so that you can read it – it’s a cracking read and a great adventure tale featuring a robot chicken apocalypse, nail-biting adventures and bird-brain comedy.

That’s enough of the chicken yolks for now.

Posted by: Sarah at DiscoverKelpies