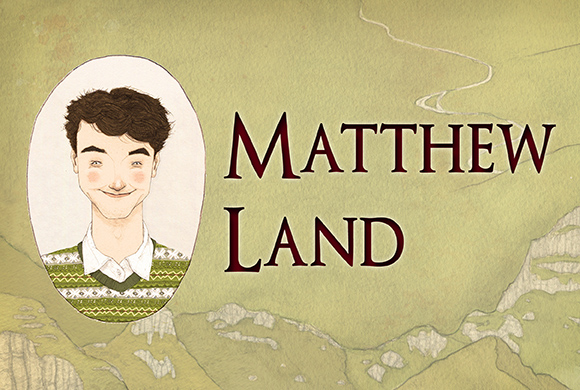 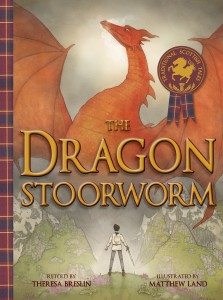 With the release date of our stunning Traditional Scottish Tales just around the corner, we thought you might like to meet the illustrators! First up we have Matthew Land, illustrator of Theresa Breslin’s dramatic tale The Dragon Stoorworm.

Hi Matthew! Thanks for giving us a sneak peek into your creation of The Dragon Stoorworm! First things first, Where did you look for inspiration when you first began your illustrations?

Theresa’s words were so wonderfully written and descriptive that I didn’t find it hard to fall in love with the story she was telling. I then created a folder of inspiration on my computer and dropped into it anything I came across that might be helpful. Towards the end of the project, the folder had gotten so meticulous and extensive that I have a file on my hard drive entitled ‘Princess G* Hair’. I also watched a number of films, Disney’s Brave was helpful.
*Princess Gemdelovely is one of the main characters in the story for those of you who have yet to read it!

A Princess with her own folder of hair-dos – perhaps we should call her Divadelovely instead of Gemdelovely! So what aspect of the story gave you the strongest visual image?

The spread where Assipattle is about to thwack the Stoorworm with the sword is the strongest image. It was also the most challenging one, because I’m not naturally good at conveying action. It was the pencil rough I put off until last because I had to work longer on the ideas. I was very aware that if I didn’t work on it, the image would just be a stilted/generic hero-slays-the-dragon scene, which hopefully it isn’t.

Well we’re sure we’ve never seen a more unique (or well dressed) dragon-slaying hero, so you triumphed there! Now what’s your favourite spread or vignette?

My 1st favourite is the first spread where the dragon is laid out amongst the mountains because it was the one that flowed most easily from idea to imagery. Also it was the rough that got me the job. My 2nd favourite is the vignette on the last page, because although it is quite simple compared to some of the other spreads — though the regular human eye might not detect it — I can see some of my strongest work in it. Also everyone needs a good happy ending. 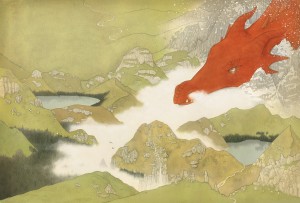 We love your first spread too, we knew you were right for the job as soon as the rough came into the office. Now, as well as all the beautiful spreads you created, you also designed your own endpapers; are patterns something you enjoy creating?

I am a big fan of patterns, they make things look nicer, and when it all comes down to it, I (not so secretly) just like making things look pretty. Creating patterns is also very relaxing, the repetitiveness puts my brain onto cruise control. *whispers* And you can just paint a small portion and then copy and paste.

The final endpapers – aren’t they smashing?!

Hurrah for Photoshop! So how did you decide on the colour palette for The Dragon Stoorworm?

Colour is the biggest part of my work but also the most challenging thing to get right. That’s the main reason I appreciate the invention of Photoshop. The biggest challenge (colour-wise) was getting the precise red of the dragon, because it needed to be a colour that contrasted nicely with the green of the Scottish landscape. Also my plan was originally to have Princess Gemdelovely with dark hair and Assipattle was going to have red hair. It turned out for the best but doesn’t stop everyone I know from pointing out that I based the hero on myself, which I didn’t… not consciously anyway.

Even the #FlorisDesign team wondered if you’d based him on yourself! So is this what you expected working as an illustrator would be like?

I didn’t really have many expectations as to what being an illustrator would be like, only, I did imagine I’d be taken out to more business lunches than I actually have been, which is mostly none.

Well we solemnly swear to take you out for a veritable feast next time you’re in Edinburgh! A medieval feast perhaps?… Did you find working under contract different from working on personal projects?

It is different, but easier, I need deadlines to help maintain a semblance of a routine, but it also forces me to be less precious over my work. If left to my own devices I will either spend a week nitpicking over the teensiest detail, or doing nothing whatsoever. I like knowing where something is headed, and at the moment personal projects don’t provide me with that security.

Knowing that, is there any advice you wish you could give to your younger illustrator-self?

I’m not at the stage yet where I can give anyone advice. I will have reached that point when my top priority is getting my teeth professionally whitened. But if I were being serious for a second, I’d say to not be overly protective, and to know when to call it a day on an image (I think that’s why I identify so much with Disney’s Frozen’s ‘Let it Go’). Also, learn to draw hands better.

Aaaand now we’re all singing it! Maybe we need that slogan on a poster for the office… So how much of what you draw comes from imagination and how much is from research?

For me it’s a tight balance between to two; research helps ground my imagination. It’s the research that provides a large portion of the detail within the illustrations, and I think that’s where my work has its appeal.

We agree, your detail is a huge part of what made you perfect for this job. So when you’re doing all of your research, is there a particular spot you like to work in?

At the moment my desk is crammed into my room at my family home on a farm in Wales. It’s been a necessary setup to allow me to focus fully on starting up as an illustrator since graduating from University. But I’m ready to move out now. However, in the summer months I can set up my workspace next to our lakes, which is nice (see pic). 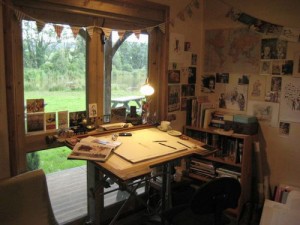 Very nice indeed! Shame we don’t have a lake nearby, although we do have a park and a rather pretty canal. Now, this is something we always ask in our interviews: what made you want to become an illustrator?

It was the only thing I could kind of do, so I went along with it with the blithe confidence of a moron, and it’s going OK so far. But don’t worry, I have back up careers if all doesn’t go so well… like flight attendanting, or librarianing.

We’d be happy to be attended by you on a flight, although we’re rather glad you’re illustrating! And finally who is your favourite illustrator or designer and why?

I have so many, but I’ll always have a very particular/special fondness for Beatrix Potter.

A most excellent choice! Thanks again for chatting with us, Matthew!

Matthew studied Illustration at University College Falmouth. ‘It was terrific and I recommend it to anyone who’d like to learn how to turn drawing into a profession by the sea.’ To see more of Matthew’s fabulous work you can visit his website, his blog, or follow him on Twitter!

Click on the cover for more info on The Dragon Stoorworm and to see more beautiful illustrations using our See Inside feature. You can also see all of our beautiful Traditional Scottish Tales on our big sister website florisbooks.co.uk!

Greyfriars Bobby – Reimagining a Legend In this guest post, author Michelle Sloan discusses how she went about reimagining a world-famous Scottish legend for her brand…
Guest Post: Sisterhood by Emily Ilett The Girl Who Lost Her Shadow The Girl Who Lost her Shadow is the stunning debut novel from Kelpies Prize…
What is a synopsis... ... and how do I write one? As part of the Kelpies Prize for Writing, we ask entrants to send…
Are you Brave? Discover our Spooky Reads! Do you like scary stories? We do! Delve into our range of spooky reads, perfect for middle-grade readers (with something…
Standing out from the crowd: How to impress the Kelpies Prize for Illustration judges! Entrants to the Kelpies Prize for Illustration are asked to submit…
Tale End A wily fox is trying to catch out Kirsty. She's outwitted him on two other occasions (you can read those…