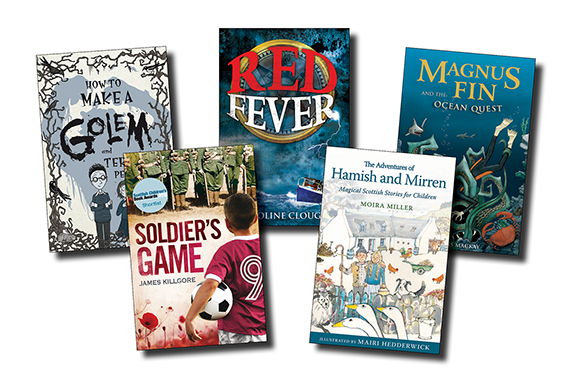 We were delighted to discover that five of our Kelpies books had been reviewed by keen Gaelic-speaking Kelpies readers for Aileag, BBC Radio nan Gaidheal‘s weekly magazine programme for children, and thought we would share them with you!

Eubha read The Adventures of Hamish and Mirren by Moira Miller. She particularly enjoyed Mairi Hedderwick’s illustrations, the different stories in each chapter, and learning Scots words such as bairn, mither and greet.

In this clip, Hannah reads her favourite passage from Alette J. Willis’ quirky (and muddy!) adventure How To Make A Golem (And Terrify People) and says that even though it was a little spooky, she really enjoyed this story.

Coinneach enjoyed reading 2009 Kelpies Prize winner Magnus Fin and the Ocean Quest by Janis MacKay (not to be confused with Aileag’s presenter Janice Mackay!). He recommends this book to other readers and because the story is good, it is set in Scotland and because the Janis creates a clear picture in the reader’s mind.

Another Kelpies review from Coinneach and in this one he tells of how much he liked Caroline Clough’s writing style in her post-apocalyptic adventure Red Fever. The third book in the Red Fever trilogy, Silver Storm, will be published later this year.

In this final clip Peter gives a score of 9/10 to Soldier’s Game, James Killgore’s remarkable novel based on a true story of war, football and loyalty. He talks of how he learnt a lot about the First World War and life in the trenches through reading this interesting book.