DiscoverKelpies > Fun Stuff > Design and Illustration > Floris Design: Behind the Scenes with Thorfinn the Nicest Viking 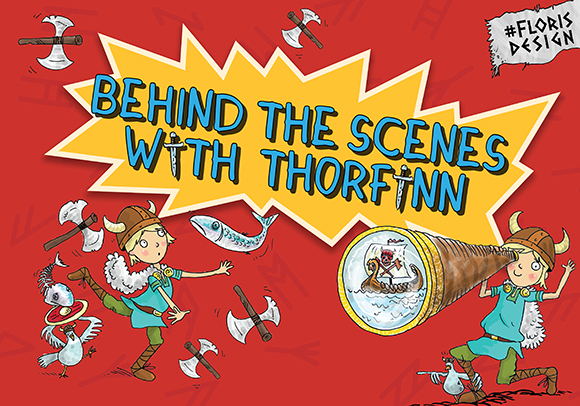 Floris Design: Behind the Scenes with Thorfinn the Nicest Viking

Today the #FlorisDesign team will be taking a look behind the scenes at some early sketches of Thorfinn-the-Very-VERY-Nice-Indeed. Thorfinn is the polite protagonist of David MacPhail’s YoungKelpies series, ably illustrated by the pen-waving, paper-wielding Richard Morgan. We’ll also be looking at our favourite moments throughout the series.

In Richard Morgan’s early sketches, Thorfinn looks a little different from the final version that we know and love. As you can see, in his first incarnation he had messy dark hair! He also looked a little sillier with goofy expressions that made it look like he knew he was up to mischief! We realised it was important to show more of Thorfinn’s considerate, well-mannered behaviour, so in later illustrations he became tidier, with a nice hair cut and a well-pressed tunic. He is definitely the cleanliest Viking in Indgar (closely followed by Percy the Pigeon). 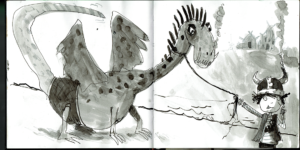 Not even a scorched helmet can fire up Thorfinn’s anger.

Final Thorfinn looking calm and collected — even hanging upside down!

Fun fact: there is a dragon in the Thorfinn books, but it doesn’t look like the one above – it’s Thorfinn’s very own ship, which is called the Green Dragon!

We also made sure he looked a little more innocent because no matter what happens, Thorfinn always has everybody’s best interests at heart! But from the very start, we knew Richard Morgan understood the character and he showed that Thorfinn is, and always has been, the nicest Viking around. With a big heart and a positive attitude, he could be friends with anyone – even a dragon!

One of #FlorisDesign’s favourite things about the early sketches was seeing how Richard captured Thorfinn’s bubbly personality and his favourite hobby: baking! 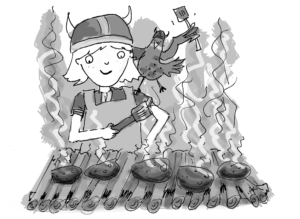 Thorfinn has always been a keen baker and master chef, right from the beginning. From cupcakes and scones to burgers and frittatas, we’ve long celebrated Thorfinn’s signature dishes.

While Thorfinn might have changed outfits and hairstyles, Richard Morgan’s sketches have always brought to life Thorfinn’s distinctive personality, showing that no matter what, Thorfinn is always polite – and always finding himself in trouble with all his friends: 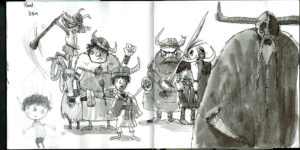 In this initial sketch, Velda strikes back as Thorfinn looks to impress the rest of his Viking community with home-cooked dinner! 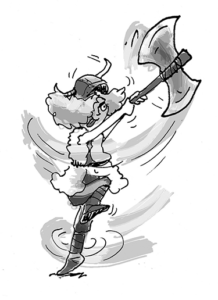 In the final books, Velda is still showing off her incredible strength!

Throughout the series, Richard has perfectly captured Velda’s fiery temper and Thorfinn’s eagerness to help. When combined with David MacPhail’s text, it has created stand out moments and hilarity. Here at #FlorisDesign, we wanted to share some of our favourite moments throughout the series. 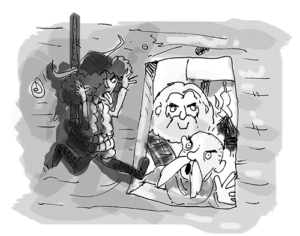 Michaela: “One of my favourite scenes is of Velda trying to escape from the Rotten Scots! She’s just been spotted and one of her captors cries: “There’s a monster at the windie!” 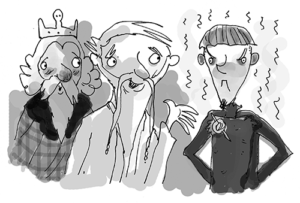 Richard: “I love Oswald’s turn as the world’s worst translator in Thorfinn and the Terrible Treasure. “You told the French Ambassador he stinks? Ye great eejit! Tell him I’m sorry!” cries King Appin. How does Oswald fix things? “I told him you’re sorry that he stinks.” Whoops!”

Interested in more behind-scenes Thorfinn?
Check out our quickfire interview with Richard Morgan or find out your own Viking name!

Signed: Mara the Big Toe (and Ragnar the Sword Splitter) 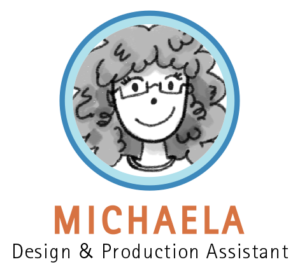 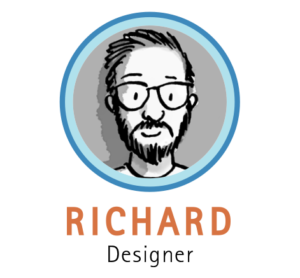 The Thorfinn the Nicest Viking Series 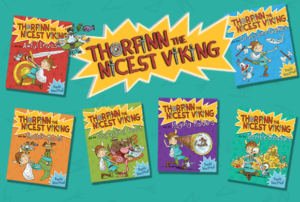