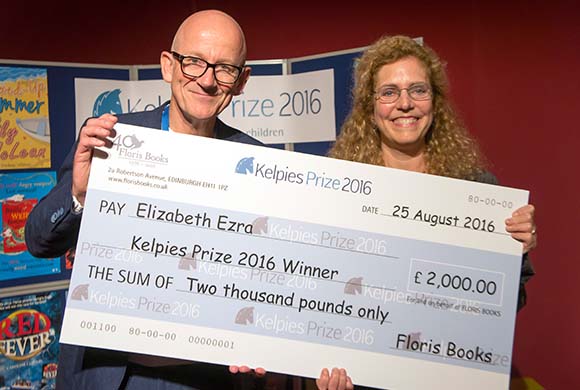 We’ve spent the last six months battling through a mountain of manuscripts, agonised over some very tough decisions, and hosted an an all singing (literally), all dancing (figuratively) award ceremony at the Edinburgh International Book Festival, and now we are delighted to reveal the winner of the Kelpies Prize 2016.

Congratulations to Elizabeth Ezra, whose sassy tale about a 12-year-old witch forced to live in the Ordinary World landed the £2000 prize and a publishing deal. The World of Norm author Jonathan Meres cajoled the audience into a rousing rendition of The Sound of Music classic Climb Every Mountain, before presenting Elizabeth with her prize.

Congratulations also go to runners up Christine Laurenson and Alan McClure, who were shortlisted for The Secret of the Tammy Norrie and The Day My School Exploded (But it wasn’t My Fault) respectively.

Born in California and working at the University of Stirling, Elizabeth Ezra always loved books about witches, and when she’d read all the witch books in her local library, decided it was time to write her own. Ruby McCracken: Tragic Without Magic, is her first book for children and will be published in autumn 2017.

When young witch Ruby McCracken’s parents lose their jobs and can no longer pay their magic bills, they are forced to leave their sophisticated magical world and start a new life in the Ordinary World – without magic.

Ruby’s life is OVER. For one thing, she won’t be able to chat to her friends about the Hex Factor any more. And she’s absolutely STARVING because her snack spell won’t work. Also how can she get revenge on the mean girls at her boring new school without using magic?

Ruby is desperate to get her magic back and find a way home. She receives a mysterious hext that seems to offer an answer, but can she work out the riddle it contains? And who could be sending her a magical hext in this dreary ordinary world?

Want to Enter Next Year’s Prize?

Manuscripts are now invited for submission to the Kelpies Prize 2017. The deadline is 28 February 2017 and for full rules and guidelines, you can read more here.