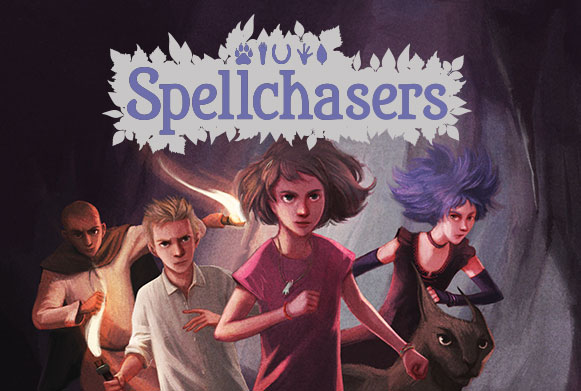 Superfans speculate on the Spellchasers trilogy

We’re waiting on tenterhooks to read The Shapeshifter’s Guide to Running Away, the next instalment of Lari Don’s Spellchasers trilogy.

In The Beginner’s Guide to Curses, Molly and her classmates reached the end of Mrs Sharpe’s curse-lifting workshop. But Molly is still stuck with her curse, and now it’s getting worse. What can the team do to lift Molly’s curse? Who is the toad? And what does the Promise Keeper have to do with it all?

We asked Lari Don Superfans Lucy and Isobel for their predictions of what will happen in The Shapeshifter’s Guide to Running Away.

Molly and the team are running away from Corbie because he’s trying to stop them from helping the toad. The toad lives in a hot country and has magical fire skills, and he needs to get a magically-powered stone that his family can’t survive without. The toad tried to get past Atacama who was guarding the stone, on behalf of an evil witch who had taken it to punish his family because they called her an ugly toad!

Molly and the curse-lifting team will meet up with each other in December when Molly is visiting her Aunt for Christmas in Craigvenie. The friends need to battle monsters, larger and more evil than the wyrm, using Molly and Innes’s shapeshifting powers. The team will have to try to get along (and in Innes’s case, not eat each other!). As always, there will be lots of exciting twists and thrilling cliff-hangers along the way!

The next book will revolve around Molly’s new-found witch powers. Molly will gain better control of her shapeshifting abilities to fight cursed magical beings like the wyrm. She might even work out how to overcome the fact that she changes back to her human form when crossing a boundary.

Do you think Lucy, Isobel or Hannah have got it right? Let us know what you think will happen in The Shapeshifter’s Guide to Running Away by posting before 16th February on Facebook or Twitter using #Spellchasers.

We’re not giving away any secrets. You’ll have to read it to find out! 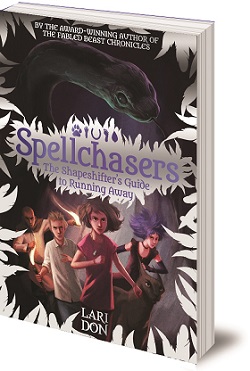 The Shapeshifter’s Guide to Running Away, the second book in Lari Don’s Spellchasers trilogy, will be published on 16th February. Look out for The Witch’s Guide to Magical Combat, the dramatic final book in the trilogy, coming Autumn 2017.

Have you missed Molly and the team’s adventures so far? Catch up in The Beginner’s Guide to Curses, available now.

Magical Mayhem at the Launch of Lari Don's Spellchasers… On Thursday evening, trainee witches, wizards and warlocks from across Edinburgh gathered in the magical surroundings of Augustine United Church…
Spellchasers: The Beginner's Guide to Curses You may have heard us talking about Lari Don's amazing Spellchasers trilogy recently, and now the first book – The…
Are you Brave? Discover our Spooky Reads! Do you like scary stories? We do! Delve into our range of spooky reads, perfect for middle-grade readers (with something…
Guest Post: Sisterhood by Emily Ilett The Girl Who Lost Her Shadow The Girl Who Lost her Shadow is the stunning debut novel from Kelpies Prize…
The Otherwhere Emporium: Read an Extract The Nowhere Emporium has returned. In the following extract, Daniel Holmes, the owner of the Emporium, has just finished writing…
What is a synopsis... ... and how do I write one? As part of the Kelpies Prize for Writing, we ask entrants to send…