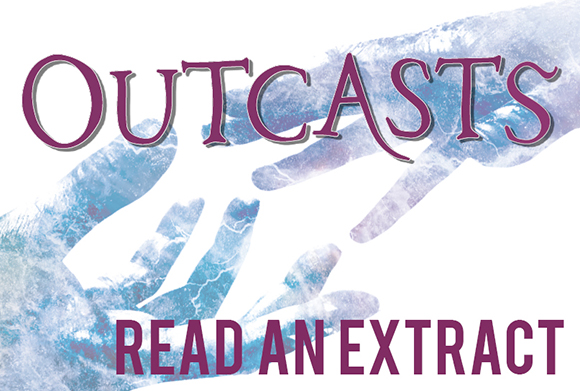 She had a stitch in her side and her legs were burning, but Dylan barely noticed. Her every thought was focused on Tristan running in front of her, and it took everything she had to keep up with him. Whenever he pulled ahead, the pain of their stretched bond reverberated around her body, and she had to force herself to pump her legs and pick up speed. Tristan reached their building a good few metres ahead of her, but Dylan was grateful. By the time she careered down the little path that led to the front door, Tristan had it unlocked and she was able to barrel straight through to the stairs.

They were nearly the death of her, but she used the handrail to haul herself up each step, each flight. By the time she’d reached their landing, though, Tristan was inside the flat. Dylan paused, leaning heavily on the railing, and stared at the open front door. Stars were exploding in front of her eyes and she thought she might topple over if she left the safety of the banister. She did it
anyway, wobbling across the landing into the flat.

“Tristan?” she gasped out. “Tristan, where are you?”

He appeared a moment later, a silhouette at the end of the hallway. His hands were clenched into fists, but because of the light streaming in from the living room behind him, she couldn’t see his face. She felt it, though, the ominous atmosphere that shrouded the flat. Something had happened, something bad.

“Is it here?” she whispered, lingering near the door, afraid to move. “Is the Inquisitor here?”

Tristan shook his head slowly and Dylan sagged against the wall with relief. That seemed to spur Tristan into motion and he walked down the hallway towards her. His steps were slow, measured. Reluctant.

“What is it?” Dylan asked. “What’s wrong?” Tristan didn’t answer. He didn’t say anything until he’d closed the remaining distance between them. Then he reached out for her. “Dylan—”

Something in the way he said her name had her dodging back, out of reach. He was being hesitant with her, careful. That frightened Dylan.

“What’s wrong?” she repeated. She shifted to the side slightly, trying to see further into the flat, but Tristan blocked her. “What is it?” she demanded. “What are you hiding?”

“Dylan—” Tristan gently took hold of her hands and tried to ease her backwards. “Let’s go and sit out on the step for a little bit, OK? We’ll just sit and—”

“No!” Dylan wrenched herself away from him. She set her feet and stared at him, willing him to see her determination. “Tell me what’s wrong. Has the Inquisitor been here?”

A slow nod. Tristan’s face was like stone, except for his eyes. They were pained, full of sympathy, of pity. Not for himself, she realised. For her. “What has it done? Has it done something to the flat?” No, as soon as she said it, Dylan knew that wasn’t right. Tristan wouldn’t act like that if it was only things, only belongings…

I’ll be beside you.
Every step until the last.

Dylan and Tristan have escaped death and conquered destiny. But their actions have caused an imbalance. The afterlife is owed two souls – and it wants them back.

Exiled from the world of the living, Dylan and Tristan face a loss worse than death: each other. Their love has got them this far, but can it survive a final heartrending sacrifice?

This is the stunning finale to the Ferryman series from multi-award-winning author Claire McFall, which has sold more than 3 million copies and been translated into 18 languages so far. Ferryman is to be adapted into a film by Legendary Entertainment, set to be directed by Kelly Marcel, script writer on Venom and Saving Mr Banks.

Guest Post: Sisterhood by Emily Ilett The Girl Who Lost Her Shadow The Girl Who Lost her Shadow is the stunning debut novel from Kelpies Prize…
The Otherwhere Emporium: Read an Extract The Nowhere Emporium has returned. In the following extract, Daniel Holmes, the owner of the Emporium, has just finished writing…
Meg with the Muckle Mouth The Scotts and the Murrays were two warring families who lived along the Border between Scotland and England. Up until…
The Kelpies Prize for Writing 2020 Winner The Kelpies Prize for Writing 2020 We hope you enjoy reading this extract from this year's winning entry - massive…
The True Story of the Loch Ness Monster... Long, long ago, before Castle Urquhart was built, Loch Ness was much smaller than it is now, and no one…
Guest Post: Hannah Foley on life as a writer and a nurse We are immensely proud to be working with Hannah Foley, who is not only an author and illustrator, but is…