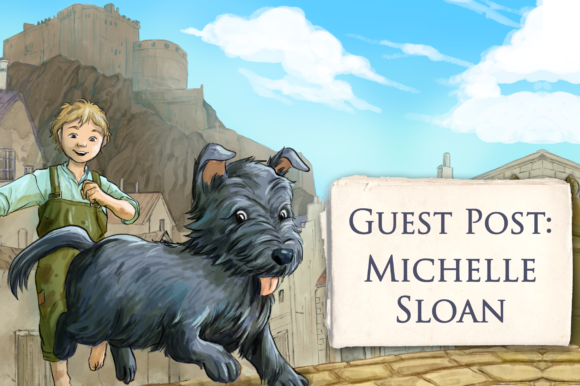 In this guest post, author Michelle Sloan discusses how she went about reimagining a world-famous Scottish legend for her brand new picture book, Greyfriars Bobby: A Puppy’s Tale. 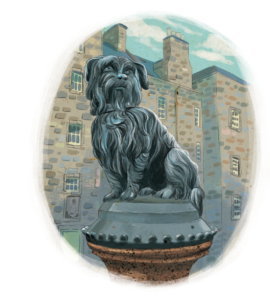 The famous statue of Greyfriars Bobby that sits proudly at the top of Candlemaker Row, on that sharp corner where it meets George IV bridge, is firmly embedded in my Edinburgh childhood. I would beg my dad to retell me the story every time we passed him on car journeys through the centre of town.

If visitors came to stay, my parents would include Bobby on tours of the city, alongside Edinburgh Castle, the Scott Monument and Holyrood Palace. We would talk of Bobby sitting on his master’s grave, in Greyfriars Kirkyard, his loyalty and love making him a local legend.

Edinburgh is a busy, constantly changing city, but the love for this wee dog endures. Now, folk from all over the world gather around Bobby’s statue for selfies, and rub his nose for ‘good luck’: a relatively new ritual which unfortunately leaves him with a polished nose­ – poor Bobby!

Plucky wee Bobby dashing around the streets of Victorian Edinburgh. 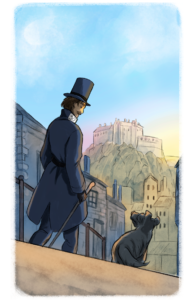 I knew Bobby’s story had been told before in children’s books, but I wanted to avoid the sadness of him losing his master. So I began to play around with ideas of his younger days, and pitched my idea to the Kelpies team. I suggested introducing this energetic wee pup running around the old town of Edinburgh having adventures, maybe getting into scrapes. The story then moves on to tell how he came to meet his future owner, John Gray in the first place: a prequel, if you will, to the familiar story.

My imagined tale of a puppy’s adventure in this Victorian city would reveal the evolution of that loyalty we admire, first to local orphan Sandy, who longs to play with the school boys of nearby George Heriot’s school, and later to John Gray, night watchman: Bobby’s destiny. 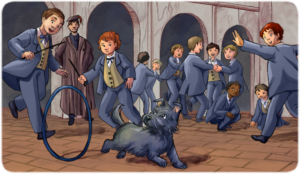 Illustrator Elena Bia then captured Old Town Edinburgh with such vibrancy and energy that her illustrations make my heart sing for the Edinburgh I know and love. My favourite is the spread of Candlemaker Row, with lines of washing hanging between the old buildings. There sits puppy Bobby, a wee premonition of the statue that would be such a draw for dog lovers around the world, around 160 years later.

As a dog lover myself (I have three!), I knew I would enjoy writing Greyfriars Bobby: A Puppy’s Tale, but I didn’t know how much that wee dog would get under my skin. Special? Loyal? Oh yes all of that. But he was, in my mind, truly unique: one in a million. He simply sought to love and to be loved. Our loyalty never wavers either. We love you, Bobby.

Michelle Sloan was born and brought up in Edinburgh but now lives with her family in sunny Broughty Ferry near Dundee, Scotland. She trained as a primary school teacher and has also studied drama and arts journalism. She is the author of Bookbug-gifted picture book The Fourth Bonniest Baby in Dundee, board book This Bonny Baby and early reader series The Animal Adventure Club.