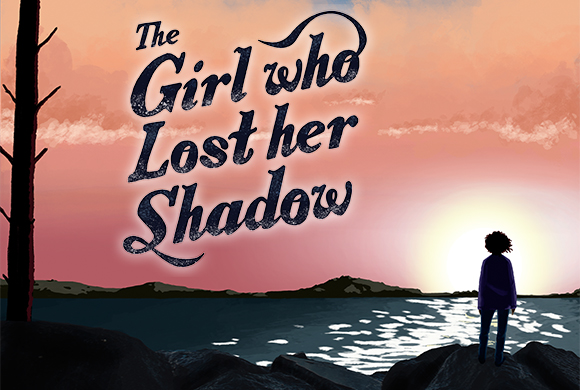 The Girl Who Lost Her Shadow

The Girl Who Lost her Shadow is the stunning debut novel from Kelpies Prize winner Emily Ilett. It is a lyrical, immersive and luminous tale of sisterhood, which tells of bravery, the effect of mental health issues and being strong enough to ask for help when we really need it. In this guest post, Emily explains how central character Gail goes through the process of learning how to be there for her older sister.

Emily Ilett on Sisterhood and
The Girl Who Lost Her Shadow

Gail was eating cornflakes when her shadow disappeared. She wasn’t surprised. Everything was falling apart, including her. And it was all Kay’s fault.

Kay was Gail’s sister. She was three years, four months and seven days older than Gail. She’d been the best swimmer on the island ever since she first learned backstroke. But now she was sinking.

The Girl Who Lost Her Shadow is about a lot of things: slippery runaway shadows, conservation, grief and bravery. But at its heart, this story is about sisterhood. It’s about being there for each other when everything feels like it is falling apart.

Kay is Gail’s older sister and she has depression. She barely leaves her room, and hasn’t been back to school after the summer break. Gail doesn’t understand. They used to do everything together; Kay taught Gail to swim, and they both dreamed of being marine biologists one day. But after their dad leaves, Kay starts disappearing into herself, she becomes tired and distant and won’t swim with Gail anymore. Feeling helpless and abandoned, Gail becomes jealous of her mum’s constant worry and preoccupation, and furious with her sister.

But after Gail’s shadow disappears on her twelfth birthday, Gail kicks at her sister’s shadow in frustration and it’s then that she begins to understand how Kay really feels.

Her feet prickled as Kay’s shadow gathered around them, silken between her toes. She gasped at the force of it. She felt emptied of everything she cared about, hollow like a clam shell cast up on a beach. Was this how Kay felt?

Kay’s shadow ripples under the bedroom door and out of the house, leaving Gail alone with this new understanding. And so Gail becomes determined to get her sister’s shadow back. She’s sure that if she brings it back, everything will go back to the way it was before Kay became depressed. But the journey she ends up on turns out to be quite different.

Diving into a world of caverns, secret maps and underwater sea creatures, Gail discovers she’s not the only one on the island looking for Kay’s shadow… As Gail fights to reach Kay’s shadow in time, she slowly discovers her own sense of self, and finds courage she never knew she had. She begins to open up and trust the new friendships she makes, and through these, she learns how to be there for her sister, after all the times Kay has been there for her.

Gail thought of Kay’s hand beneath her stomach when she’d held Gail up in the town pool, and Kay’s arm wrapped tight around her as she helped Gail back up the beach when she sliced her ankle. Gail remembered swimming in the sea together for the first time, how they’d tread water laughing, their hands held tight together. Gail swallowed hard. She knew what her shadow was trying to help her understand. “It’s my turn now,” she whispered.

She realises that it’s her turn now to be there for Kay as her sister struggles with depression, and no matter how hard this is at times, Gail knows she is stronger and braver than she thought, and that she can always ask for help.

I hope that this book opens up conversations between young readers, friends, classmates and families, about what depression and other mental health conditions feel like, both on the inside and the outside. I hope it encourages discussion about how we can best be there for each other, and what reaching out looks like.

Because reaching out takes courage. It crosses over a distance. It is one hand reaching out for another. It is Gail, sitting by Kay’s bed in the morning waiting for her sister to wake up. Not knowing what to say, but staying to say it anyway.

Gail took her hand. “Because when you’re sinking,” she said, “you always need something to hold onto.”

To celebrate the launch of The Girl Who Lost her Shadow, Emily is visiting some other blogs as well as ours! Click the links below to keep up with the latest stops on the blog tour.

Thorfinn the Nicest Viking: Piebald's Potion Maker In the latest prank-playing, turnip-mashing, bunny-kidnapping adventure, Thorfinn the nicest Viking must find a cure for Chief Harald, who has…
What is a synopsis... ... and how do I write one? As part of the Kelpies Prize for Writing, we ask entrants to send…
Standing out from the crowd: How to impress the Kelpies Prize for Illustration judges! Entrants to the Kelpies Prize for Illustration are asked to submit…
Guest Post: Hannah Foley on life as a writer and a nurse We are immensely proud to be working with Hannah Foley, who is not only an author and illustrator, but is…
The Boy with the Butterfly Mind: Blog Tour To celebrate the launch of The Boy with the Butterfly Mind, author Victoria Williamson has been busy in the blogosphere…
Are you Brave? Discover our Spooky Reads! Do you like scary stories? We do! Delve into our range of spooky reads, perfect for middle-grade readers (with something…