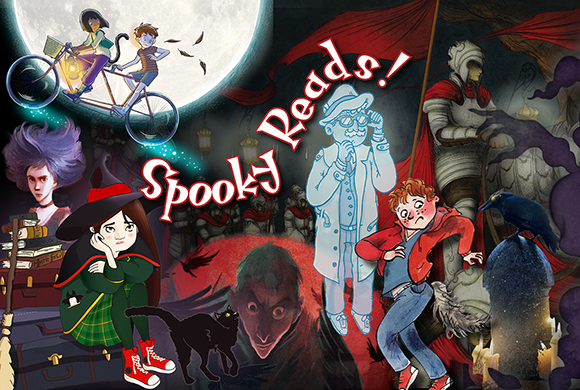 Do you like scary stories? We do! Delve into our range of spooky reads, perfect for middle-grade readers (with something for younger readers thrown in too). From cosy magic to shapeshifters, monsters, ghosts and ghouls, read on to discover some of our favourite books for Halloween!

On a quest to uncover her forgotten past, Avery Buckle (part-girl, part-cat) and her shapeshifting best pal Low are plunged into a haphazard world of shadowy monsters, bewitched libraries and flying bicycles. The Spellbinding Secret of Avery Buckle is a warm and quirky whirlwind of an adventure, full of magical heart from Kelpies Prize-winner Hannah Foley. An unmissable read!

Ruby McCracken’s life is OVER. Her parents have forced her to move to the Ordinary World and that means – new home, new school and worst of all, no magic! Seriously?! A witch without magic? That’s LITERALLY tragic. Packed with great humour, loveable characters and witty (witchy!) banter, Ruby McCracken: Tragic Without Magic is perfect for fans of Witchworld and The Worst Witch.

You’ll need to be brave to get to the end of Shadowsmith, from Blue Peter Book Award winner Ross MacKenzie. Enter a magical and unexpected world, with plenty of twists and turns to keep you guessing! From the author of The Nowhere Emporium.

The Beginner’s Guide to Curses is the dramatic first instalment in a series brimming with brilliant magic, dark danger and extraordinary friendship from award-winning author Lari Don. Molly Drummond is cursed: whenever a dog barks, she turns into a hare – which can make life quite dangerous… So she does the sensible thing and attends a curse-lifting workshop, run by a local witch. Things only get more complicated from there…

Alex Nye’s debut novel Chill won a Scottish Children’s Book Award back in 2006 and we’re sure you won’t be able to put down this spine-tingling novel about the cursed Morton family! Trapped by snow and ice and faced by a ghostly presence, can Fiona and Samuel escape the chill or will the Morton children be doomed to repeat the past forever?

We meet Fiona and Samuel again in Alex Nye’s hair-raising sequel to Chill, when the two friends must once again confront the secrets of Dunadd House. Shiver is spooky tale about the past coming back to haunt the present…

In Dark Spell, 15-year-old Callie has found out she’s a witch and is struggling to control her power – she can set fire to things without a match, and when she’s angry people can get hurt. The most recent publication in our spooky reads list, Gill Arbuthnott’s nail-biting tale of teen witch Callie Hall was shortlisted for the Scottish Children’s Book Awards 2015.

Not the spookiest read on this list, but Top-Secret Grandad and Me: Death by Tumble Dryer is a whole lot of wacky murder mystery fun, and the grandad in question is… y’know, a ghost. Definitely still Halloween appropriate, this book stars detective Jay Patel and his top-secret sidekick – his ghost grandad! Can Jay and Grandad solve the first in a series of hilarious and wacky murders? Laugh-out-loud mystery series from David MacPhail, author of Thorfinn the Nicest Viking.

Looking for an engaging chapter book for emerging readers? Alan Dapre‘s Porridge the Tartan Cat and the Unfair Funfair is a great choice! Porridge the Tartan cat and twins Isla and Ross can’t wait to visit the funfair that’s just come to town – but this funfair isn’t fair at all. Riding the Howlercoaster doesn’t just turn their knees to jelly, it turns Ross into a hairy scarewolf! Dastardly Fangus McFungus is behind it all, but what exactly is he up to?

And last but not least, we have a stunning picture book from award-winning author Lari Don and illustrator Philip Longson. Set at Halloween, The Tale of Tam Linn is a traditional tale from the Scottish Borders adapted and retold for a younger audience. Legends, spells and Scottish creatures… will Janet be able to rescue Tam Linn from the evil Fairy Queen?

Guest Post: Hannah Foley on life as a writer and a nurse We are immensely proud to be working with Hannah Foley, who is not only an author and illustrator, but is…
Kelpies for Christmas On the hunt for the ideal Kelpie to gift at Christmas this year? The season has well and truly landed…
Features for Teachers: The Spellbinding Secret of… Are you looking for rewarding reading resources that your pupils will relish? Then why not try this great resource pack…
Kelpies Video Library On this page, you will find an alphabetical list of video content related to Kelpies books, available for free online.…
Guest Post: Sisterhood by Emily Ilett The Girl Who Lost Her Shadow The Girl Who Lost her Shadow is the stunning debut novel from Kelpies Prize…
The Baby Red Squirrel Rescue Activities The Animal Adventure Club, Isla, Buzz, Gracie and Lexi are always keen to learn more about the environment and the…