DiscoverKelpies > Fun Stuff > Greetings from the Brotherhood of the Egg 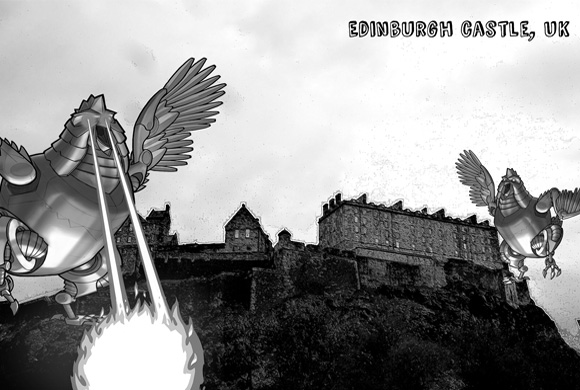 Greetings from the Brotherhood of the Egg

Fowl play was suspected this morning at the newly renamed Hatching Gardens as rumours of feathered fiends attacking the streets of Edinburgh, sorry Hen-inburgh, came to light. Beady eyewitnesses report that adult humans are being snatched by GIANT ROBOT CHICKENS and all signs of resistance from local residents are being pecked out.

An organisation known as the Brotherhood of the Egg has claimed responsibility in response to the release of DiscoverKelpies eggsciting new book, Attack of the Giant Robot Chickens.

All local social media, websites, radio and television have been taken over by the giant robot chickens, and a spokeschicken from the Brotherhood of the Egg delivered the following ominous message at dawn this morning: “Cluck cluckity cluck. Cheep cheep, cluck. Cockledoodledoo.”

For all non-chicken speakers, Cluckle Translate have provided an official translation:

Children of the humans. We, the giant robot chickens, are your new leaders. I know that some of you are still out there and some might even have ideas about fighting back. That is futile. For too long our race, the chicken race, has been enslaved by yours. Now is our time. Now we will break free and take back the world.

You have no chance against us. We will win. So join us now.

You will be safe. You will be cared for. But if you stand against us we will find you. And we will take you.

Worrying news indeed. While unconfirmed reports suggest that an Aberdeen collective known as the Train Gang are fighting back, Hen-inburgh City Coop recommend that all non-poultry lifeforms remain indoors and monitor the developing situation via the DiscoverKelpies Twitter feed, #GiantRobotChickens.

This is Nuria, reporting for DiscoverKelpies. Now over to Henny Penny in the chicken coop.

New Year: New Kelpies! Gooooood morning 2019! We can’t quite believe we’re here again already, but we have a whole new list of Kelpies…
Kelpies for Christmas On the hunt for the ideal Kelpie to gift at Christmas this year? The season has well and truly landed…
Are you Brave? Discover our Spooky Reads! Do you like scary stories? We do! Delve into our range of spooky reads, perfect for middle-grade readers (with something…
Greyfriars Bobby – Reimagining a Legend In this guest post, author Michelle Sloan discusses how she went about reimagining a world-famous Scottish legend for her brand…
Guest Post: Hannah Foley on life as a writer and a nurse We are immensely proud to be working with Hannah Foley, who is not only an author and illustrator, but is…
A Tour of Scotland in Stories We all know that Scotland is full of stories. It's not surprising, really; the rugged mountains, mysterious lochs and impressive…