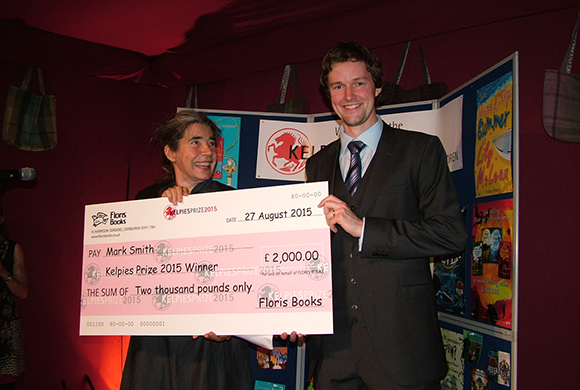 Earlier this year, Floris Books celebrated a decade of awarding its Kelpies Prize for unpublished Scottish children’s fiction. And what a decade it has been!

Floris took over the Kelpies imprint of Scottish children’s novels from fellow Scottish publisher Canongate in 2002. In the last 10 years we’ve published more than 35 books (roughly a third of all the Kelpies books in print) by authors discovered through the Kelpies Prize.

It’s not just the prizewinners who’ve gone on to be published. On many occasions we’ve published Kelpies Prize runners-up too. In the 10 years of the prize we’ve published 14 new authors, including a bumper year in 2011 when we published all three of the shortlisted authors.

Without these authors, our wonderful range of Scottish picture books, the Picture Kelpies, would be missing some great titles – like Thistle Street by Mike Nicholson, winner of the first Kelpies Prize in 2005. And our young teen range, KelpiesTeen, might never have been conceived without Roy Gill (shortlisted for the 2011 Prize). Originally, the prize asked for children’s fiction for 8 to 12 year olds, but our authors are a talented and versatile lot and the Kelpies imprint is growing. We now have books aimed at five age ranges from tots to teens, and for 2015 Prize we opened submissions for three different categories: 6 to 8, 8 to 11 and 11 to 14 years.

We like to think that our judges have an eye for talent and the fact that many of our Kelpies Prize authors have gone on to be recognised by other awards, seems to confirm that. Kelpies Prize authors are the proud owners of several Scottish Children’s Book Awards (Scotland’s most prestigious children’s book prize) and have also been shortlisted for, and won, the Heart of Hawick Award, Salford Book Award, Hillingdon Primary Book of the Year Award and many more besides.

So after another successful Kelpies Prize and a record number of entries, we remain hopeful for the future of our Prize and so many others like it. Hopeful and eternally grateful for the authors who take the time to submit to us, to Creative Scotland who supports it and to the legacy that it has allowed us to create.

Guest Post: Hannah Foley on life as a writer and a nurse We are immensely proud to be working with Hannah Foley, who is not only an author and illustrator, but is…
What is a synopsis... ... and how do I write one? As part of the Kelpies Prize for Writing, we ask entrants to send…
Are you Brave? Discover our Spooky Reads! Do you like scary stories? We do! Delve into our range of spooky reads, perfect for middle-grade readers (with something…
Not Your Typical Unicorns... The unicorns of Lindsay Littleson's latest middle grade novel are not your typical unicorns. Wild, dangerous, and hunted almost to…
The Kelpies Prize for Writing and Illustration The Kelpies Prizes 2022 are now open for entries! Are you a writer or illustrator based in Scotland? Do you…
The Otherwhere Emporium: Read an Extract The Nowhere Emporium has returned. In the following extract, Daniel Holmes, the owner of the Emporium, has just finished writing…