DiscoverKelpies > Books > What is a Kelpie anyway? 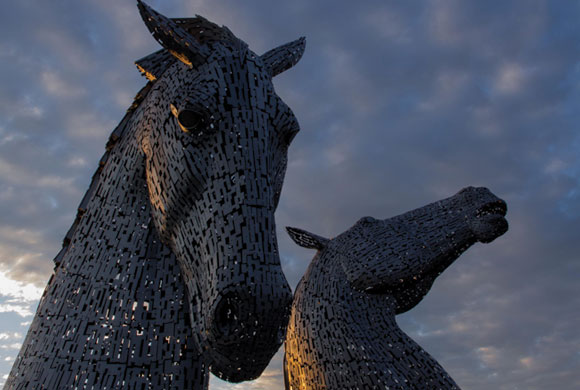 What is a Kelpie anyway?

What is a Kelpie? Ask anybody in Scotland this question and they will most likely point you in the direction of Andy Scott’s impressive Kelpies sculpture at The Helix in Falkirk. Towering over the road at over 30 metres tall and weighing over 300 tonnes, the steel structures are the largest equine sculptures in the world and took almost eight years in the planning. The Kelpies have gained worldwide attention and two mini models of the Kelpies have toured the world, shining the spotlight on the culture and the arts in Scotland.

Though Andy Scott’s inspiration for these structures was drawn from Scotland’s industrial history and the figures are modelled on Clydesdale horses, Scott’s awesome piece of art has sparked interest and enthusiasm for the mythical origins of these fascinating creatures.

In Scottish folklore, a kelpie is a magical water-based spirit which normally comes in the form of a horse. It has shapeshifting qualities and uses its ability to steal children. It is believed to inhabit deep pools of water such as lochs or rivers but visit any other large stretch of water in Scotland and you’ll probably discover an accompanying kelpie story.

For hundreds of years kelpies have been referenced in art and literature — from the writings of Robert Burns to Andy Scott’s recent sculptures — and we too have a few kelpie stories of our own at Floris Books. Ours, however, are a little bit different…

The kelpies you’ll find on this website are also magical and inspiring but instead come in the form of board books, picture books and novels. Like the other kelpies mentioned earlier, some of our Kelpies are based on old Scottish tales and mythical creatures with an original twist like Lari Don’s popular Fabled Beast Chronicles, while others such as Ross MacKenzie’s The Nowhere Emporium come from entirely new and exciting ideas.

With the help of our talented and creative authors and illustrators, and awards like the Kelpies Prize and Kelpies Design & Illustration Prize, the Kelpies are the best Scottish books for children everywhere.

Discover our range of Kelpies books for children aged 1 – 14.

The King's Three Questions Scone Palace, and the Moot Hill, which is just beside it, have a long history going back to the time…
The True Story of the Loch Ness Monster... Long, long ago, before Castle Urquhart was built, Loch Ness was much smaller than it is now, and no one…
What is a synopsis... ... and how do I write one? As part of the Kelpies Prize for Writing, we ask entrants to send…
The Otherwhere Emporium: Read an Extract The Nowhere Emporium has returned. In the following extract, Daniel Holmes, the owner of the Emporium, has just finished writing…
Standing out from the crowd: How to impress the Kelpies Prize for Illustration judges! Entrants to the Kelpies Prize for Illustration are asked to submit…
Guest Post: Searching for Unicorns by Lari Don Have you ever been surprised by a unicorn? In today's guest blog, Lari Don explains why Scotland has so many…