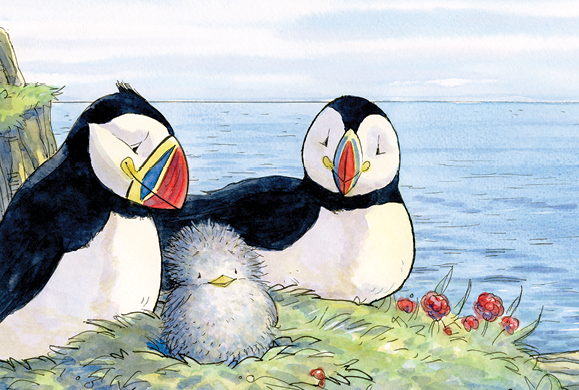 When the main character of your picture book is a baby puffin who grows up, you’ve got a bit of a problem. Skye the Puffling starts as a fluffy little grey thing and ends up looking just like her parents. This gradual transformation made it tricky for the illustrator, Jon Mitchell, who had to think about the children reading the book who might not recognise Skye from beginning to end. He must have done quite a bit of puffin research: 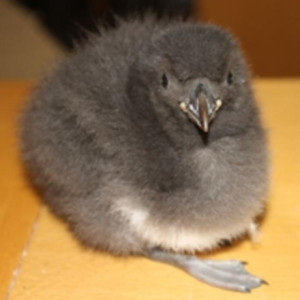 After the grey fluffy stage, pufflings start to grow proper feathers and the fluff falls off. This process of molting lasts some time and makes them look rather odd. Perhaps it’s no surprise Jon decided not to show Skye in this in-between phase! 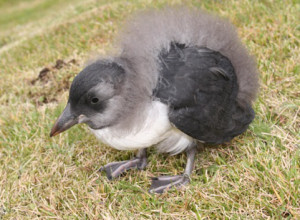 Before it becomes a fully-grown puffin, the ‘teenage’ puffling is a dark grey and white, and it hasn’t yet got its brightly coloured beak and feet. In time the black-and-white colouring becomes more pronounced and the oranges and blues start to appear. 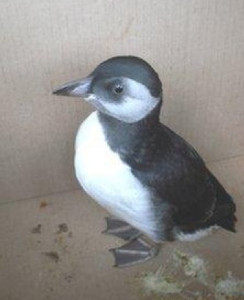 My favourite illustration from Skye the Puffling is a sweet portrait of the teenage Skye, who is gradually turning black-and-white like her parents. Jon Mitchell used watercolours to great effect here: 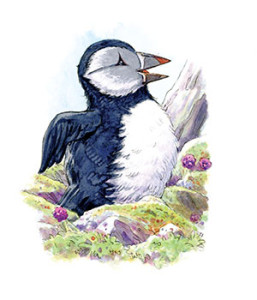 You can see that fluffy grey pufflings look very different from their parents, and they are not unusual in that way. Lots of cute baby animals grow up with quite surprising results! Here is another baby bird who is not only a different colour from his mum and dad, but also quite a different shape. 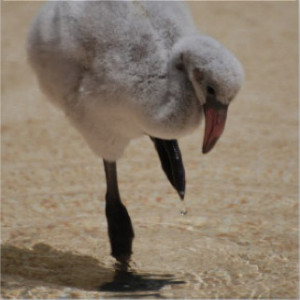 Can you guess what kind of bird he is? You might be able to tell from two clues. One is his beak, which is starting to curve like his parents’ and has a slight pink tinge. The other is the fact that he is standing on one leg. Have you figured it out? 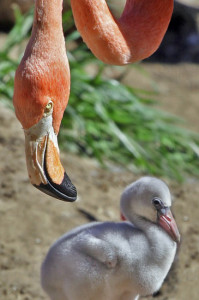 He’s a flamingo! It will take another two or three years for his feathers to turn pink, as a result of the food he eats. His beak will continue to grow in a curve and will develop black markings at the tip. Look how much growing his little stumpy wings will have to do!

Here is another baby animal that looks quite different from his parents. He is covered in stripes and spots so as to blend in with his natural surroundings (a forest with dappled sunshine): 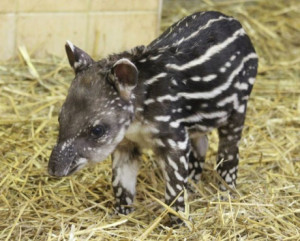 He is much smaller than his mum and comes from Brazil in South America. Do you know what he is? 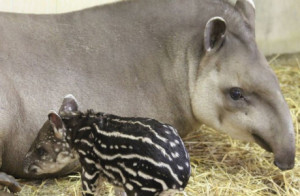 He’s a tapir. When he gets bigger his stripes will disappear and he’ll turn a pale grey all over. Tapirs look a bit like pigs but are actually related to horses, donkeys and rhinos. There are several different types of tapir and some are black with a white back. A tapir like that is the star of a new children’s book called Mango & Bambang: The Not a Pig by Polly Faber and illustrated by Clara Vulliamy. It looks like a lovely book and is part of a series, so Bambang the tapir has all sorts of interesting adventures!

Here is one more baby animal that looks quite different from his parents. You might be able to guess what he is by his colouring: 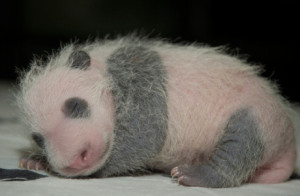 He is very tiny compared to what he will be when he grows up. He will also get a lot more fur, so he won’t look like a little fuzzy pink eraser forever. He doesn’t look very fierce yet, but one day those claws will be big and scary. Can you guess what he is? 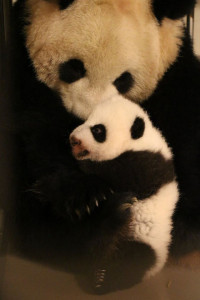 He’s a panda bear! Perhaps you guessed because of his little black ears and the black circles on his eyes. In this picture with his mum you can see he has grown quite a bit, but he still has a long way to go. Pandas come from China but they can be found in zoos around the world. We have two pandas in the Edinburgh Zoo that were a gift from the Chinese government. The zoo’s website has a PandaCam where you can see what the pandas are doing. You can also watch the penguins and the spider monkeys. I am writing this late at night, so when I looked it was dark and quiet. I guess everyone was sleeping!

Lynne Rickards is the author of three fab Picture Kelpies: Harris the Hero, Lewis Clowns Around, and now Skye the Puffling!