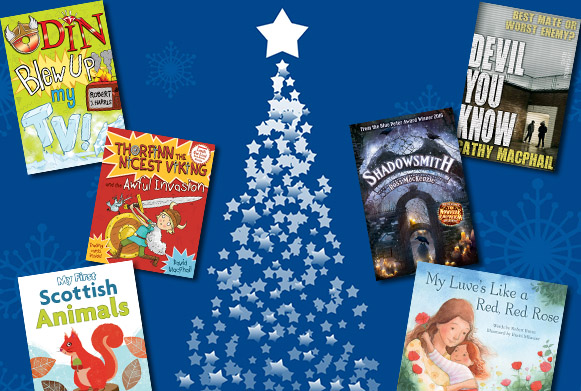 Our Wee Kelpies library, featuring colourful board books with a Scottish twist, illustrated by Kate McLelland make great gifts for wee ones (whether they’re Scottish or not!)

From the rambunctious to the gentle, there’s a Picture Kelpie for every child!

For the cuddlier kid, how about our unique version of Robert Burns’ My Luve’s Like a Red, Red Rose – reimagined as the love between a mother and child.

Emily Dodd’s tale of valuing difference, The Grouse and the Mouse will make a great Christmas gift for little animal lovers.

Each of our Young Kelpies series are highly illustrated and great for early or reluctant readers. And they all come with trading cards, games and puzzles!

Football fans will love Danny Scott’s Scotland Stars F.C. series. Don’t miss a minute of the non-stop action as 10-year-old Calum Ferguson struggles to settle into a new town whilst fighting for his place on the school football team.

For children who like their stories funny and fearsome, try David MacPhail’s Thorfinn the Nicest Viking. Set in a world where manners mean nothing and politeness is pointless, what could possibly go wrong for the nicest, politest Viking that ever lived?

So much choice! Why not use our interactive Kelpies map to find a story set near you?

Lari Don’s The Beginner’s Guide to Curses opens a world of brilliant magic, dark danger and extraordinary friendship in the first installment of the long-awaited Spellchasers trilogy.  The Sunday Herald has rated it “among the most exciting books of 2016 for 8-12 year olds.” Fantasy adventure lover, tick!

Do you know someone who likes their books with bite? Then Shadowsmith, by Blue Peter Book Award winner Ross MacKenzie will hit the spot. But be warned, this one is only for the brave.

For those who like their adventures zany, hilarious, with a smattering of Norse gods, The World’s Gone Loki trilogy by Robert J. Harris may be just the ticket. Set in St Andrews, this is a series full to bursting with monsters, mayhem and mischief…

Match your teen with attitude to one of our KelpiesTeen books!

For the realist, Cathy MacPhail’s Devil You Know should hit the right buttons. This gritty crime thriller, set in Glasgow, has a killer twist! (No spoilers…)

For the romantic, try Gill Arbuthnott’s Beneath. Caught between two worlds, between kelpies and humans, and between mysterious Finn and brave Magnus, Jess must chose between what she’s always known – and what lies beneath.

Order now for £5 off orders over £20 using discount code GIFT16! Place your order before 5pm tomorrow, 16 December, for delivery in the UK in time for Christmas.