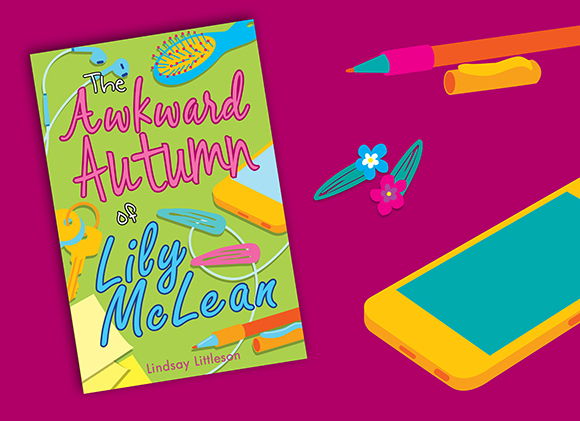 If you know anyone moving up to high school after the summer you may well want to introduce them to the engaging, funny and slightly troubled Lily McLean. Here we catch up with her creator Lindsay Littleson. 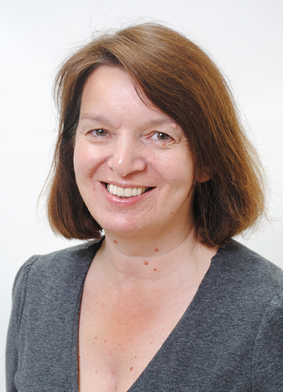 Hi Lindsay, thanks for talking to us today. Many of our authors have been avid readers and writers since they were children. Have you always been a writer?

When I was about nine I wrote stories in a ‘borrowed’ school jotter about a boy called Flipper and his exciting undersea adventures (I was probably inspired by the film Flipper). As a teenager I wrote reams of terrible poetry and I started writing short stories while I was at university. My life got so busy that I stopped writing altogether when I had four children and became a teacher. That was until three years ago, when it dawned on me that if I wanted to become a published author I ought to start writing again or it was never going to happen!

What have you learnt about writing since winning the Kelpies Prize in 2014?

I love writing and I wish I’d started years ago! Getting a book published was my childhood dream and I was absolutely over the moon when The Mixed-Up Summer of Lily McLean won the Kelpies Prize. However, being a children’s author is not an easy job and initially I was surprised by how many events are required.

Self-promotion can be especially challenging for debut and unknown authors and, although I’ve had to become rather good at blowing my own trumpet, I’m still far more comfortable in my own home, sitting in my pyjamas with a laptop and cup of tea! However, I relish talking to children at events and love helping to inspire the budding young writers of the future. 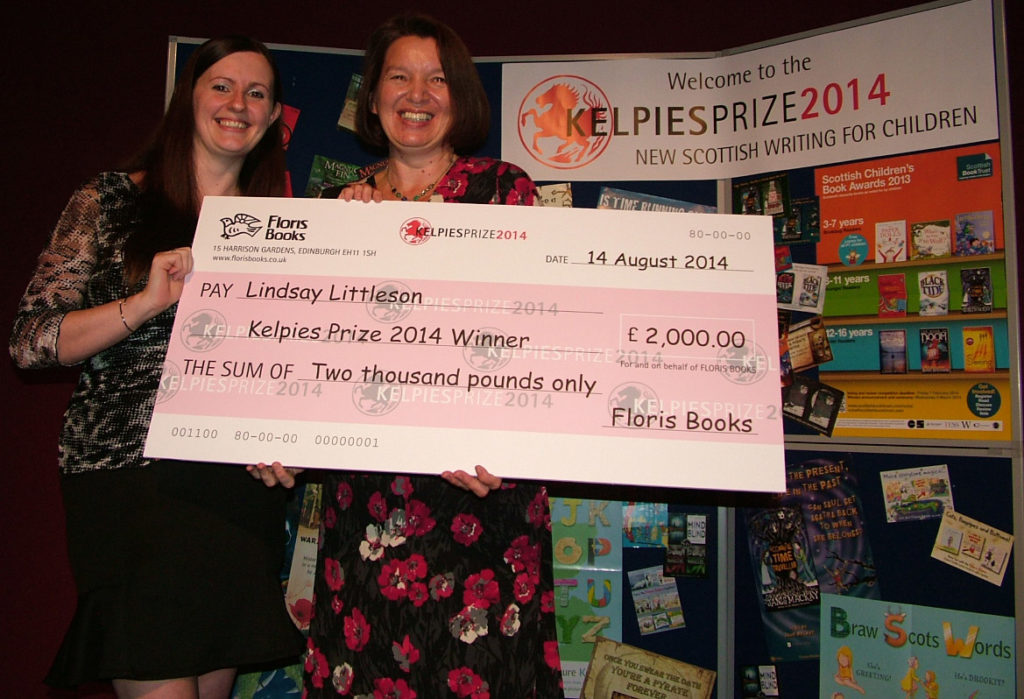 Lindsay Littleson is presented with her winnings by KelpiesEdge author Claire McFall, at the Kelpies Prize 2014

Can you tell us a bit about your writing process?

When I get an idea for a story I jot down my initial thoughts in a notebook with little doodles of the characters. My secret weapon is my daughter Emily who is brilliant at helping me to bounce ideas around. Because my books have a lot of plot twists it’s important to do the planning first. I begin with a rough outline of the chapters, often on post-it notes. By this stage, I’ll be desperate to dive in and start writing! My writing time is between 7pm and 10pm as I teach full-time. People sometimes ask me if I need peace and quiet to write. However, I’m happy to work in the living room while my partner and daughter are chatting or watching television, oblivious to background noise, until I hear the words, “Would you like a cup of tea?” 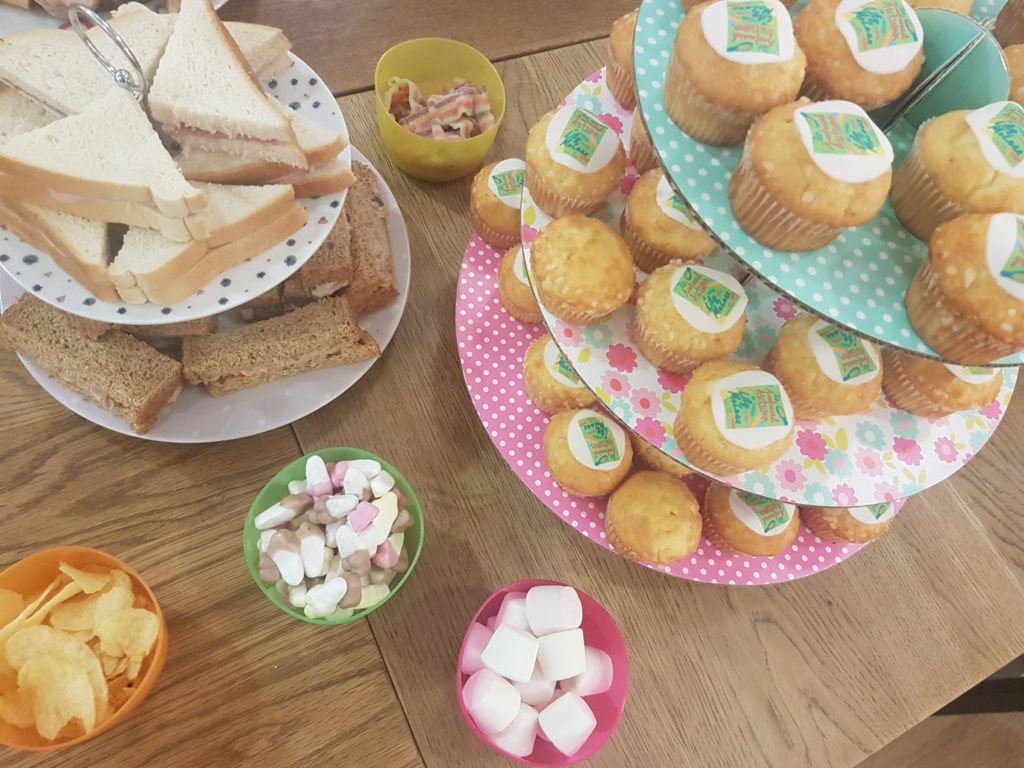 I haven’t had serious writer’s block yet, probably because I have thirty years worth of ideas for stories tumbling around in my head! If I have a week or two when my heart’s not really in it, I stop writing and read instead. After I won the Kelpies Prize I was so keen to write every night that I stopped reading for a while. I’ve always been an avid reader, it’s as important to me as writing. I’ve achieved a better balance now. 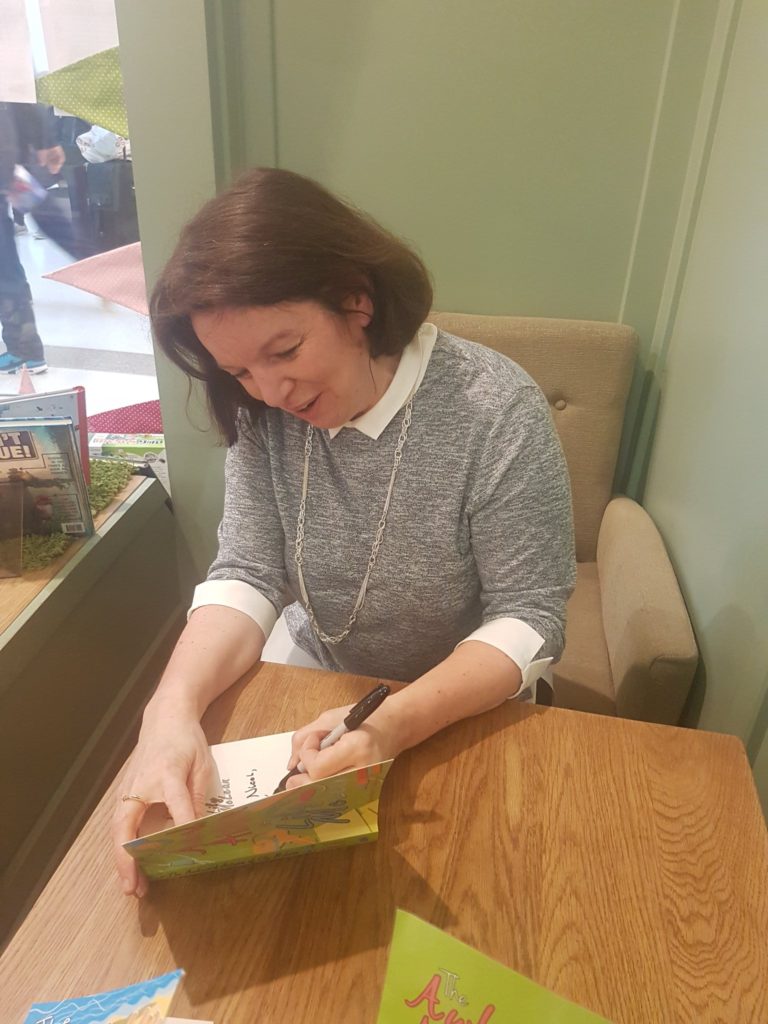 Where did you get the idea for the Lily McLean books?

I wanted to write books set on Cumbrae and Arran because I love both islands; small islands are such magical places. I wanted my stories to have some magic too but at the same time I wanted my characters to be realistic and relatable. The theme of transition seems to be one with which everyone could identify. I have vivid childhood memories of being horribly nervous about the prospect of leaving my tiny rural primary and going to secondary school. Like Lily, I was a child who liked making lists; aged eleven I had a list of worries a mile long. 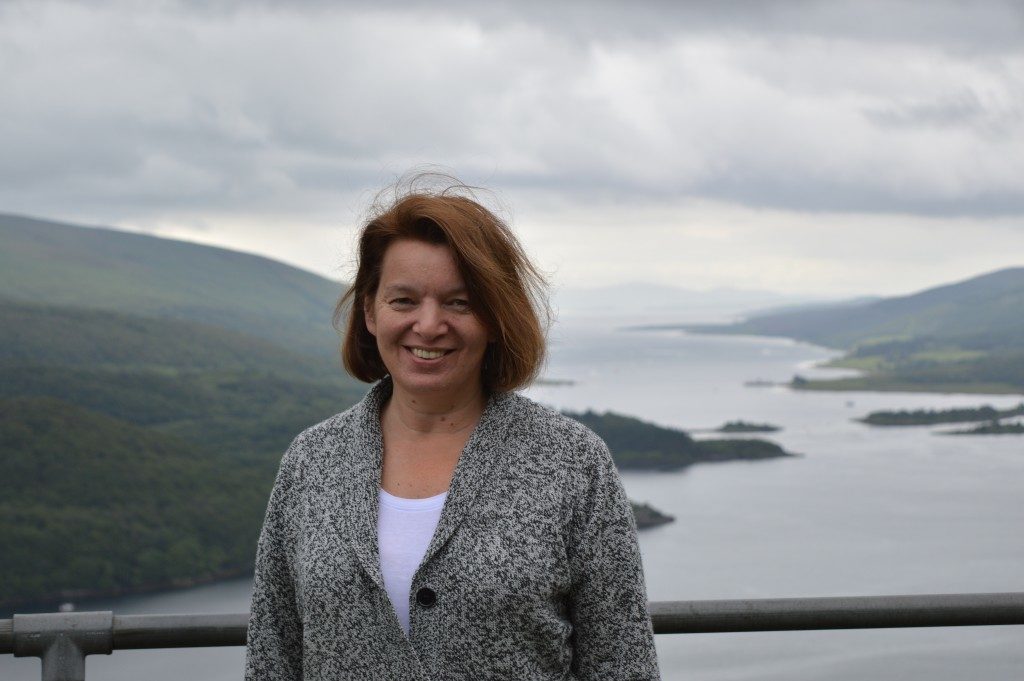 In The Awkward Autumn of Lily McLean, Lily is faced with the challenge of moving from primary to secondary school. What advice would you give to her?

I’d advise her not to worry about being ‘popular’. I think you only need one or two real, kind friends in order to be happy. Also avoid saying mean things about somebody just to make others laugh or to fit in.

As a teacher, you must have met thousands of pupils. Have any of them made their way into your books?

Not directly, but listening to children’s conversations really helps me when I’m writing dialogue. My pupils are only five and six, the same age as Bronx and Hudson. Their conversations are often hilarious, as is their writing. This is my favourite ever letter from a pupil. 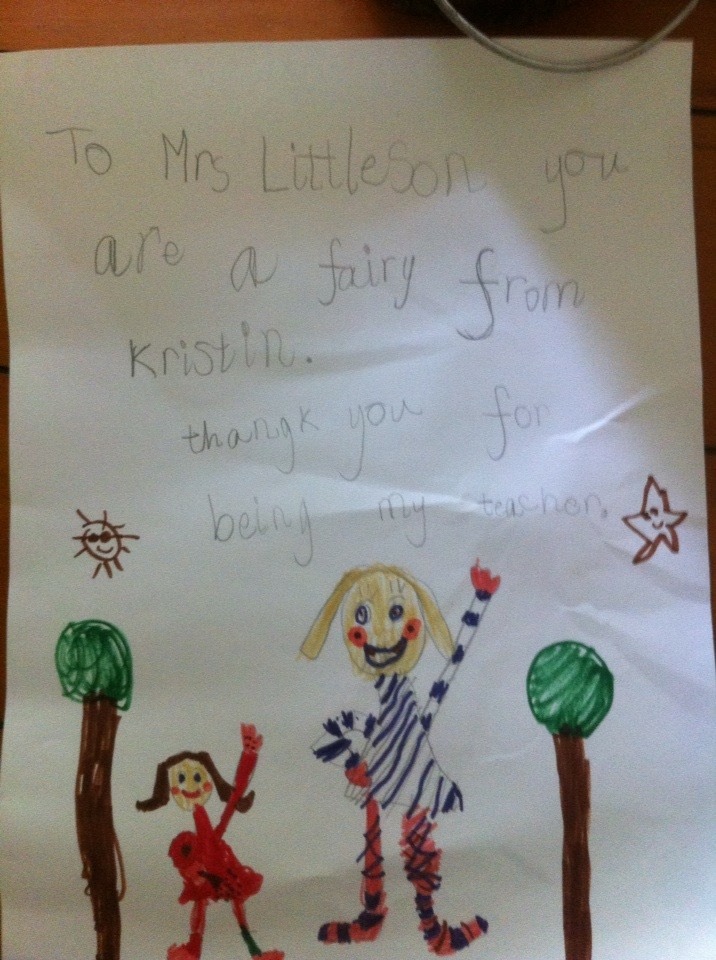 “To Mrs Littleson, you are a fairy. From Kirstin. Thank you for being my teacher.” Lindsay’s favourite letter from a school pupil.

Are there any other authors who inspire you?

I adore The Family From One End Street by Eve Garnett, which I first read aged eleven. The Ruggles kids didn’t go to boarding school or own their own island. They were an ordinary working class family and as the eldest of five children I could really relate to bookish Kate Ruggles and her constant struggle to find some peace and quiet. It’s important that even when her life gets weird, Lily McLean should be as real to my readers as Kate Ruggles was to me. 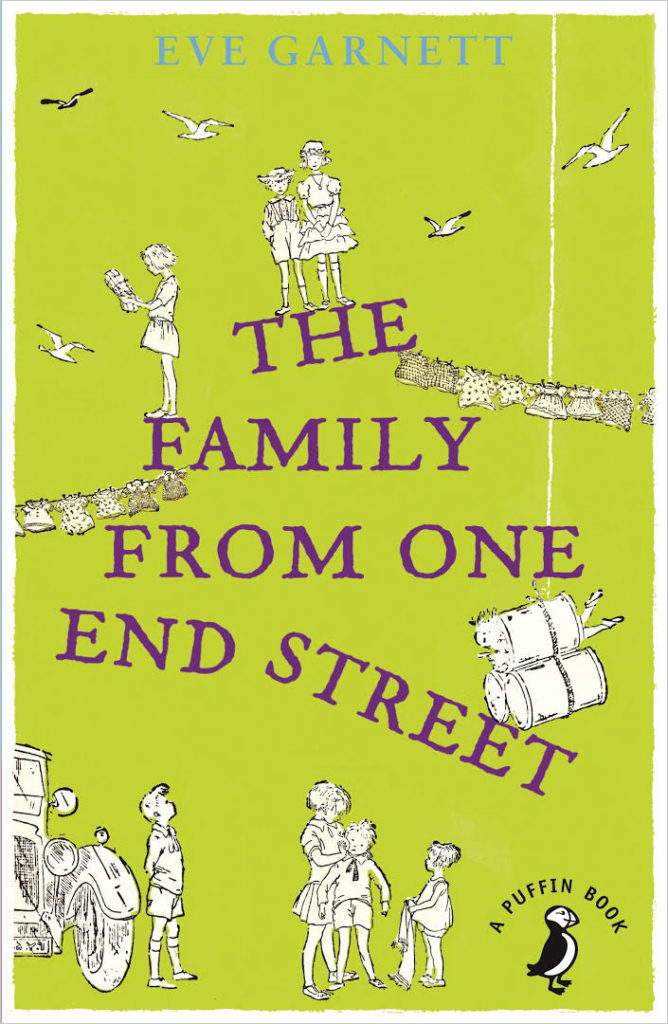 One of Lindsay Littleson’s favourite books. 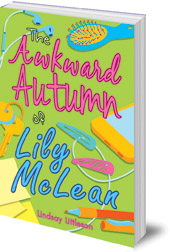 For more news and updates about what Lindsay Littleson is up to, visit her website.

Are you a budding author with literary flair? We want you! Discover more about our Kelpies Prize here.

A sneak peek into Lily McLean's diary Lily McLean had a Mixed-Up Summer. Now she's (not) looking forward to an Awkward Autumn. Telling people you hear voices…
Summer holiday secrets win Kelpies Prize 2014! The wait is finally over! After months of reading and weeks of waiting, we're so excited to tell you that…
The Kelpies Prize for Writing - Previous Winners The Kelpies Prize for Writing was launched in 2004 (as the Kelpies Prize). Find out more about our previous winners…
Not Your Typical Unicorns... The unicorns of Lindsay Littleson's latest middle grade novel are not your typical unicorns. Wild, dangerous, and hunted almost to…
Guest Post: Sisterhood by Emily Ilett The Girl Who Lost Her Shadow The Girl Who Lost her Shadow is the stunning debut novel from Kelpies Prize…
Outcasts: Sneak Peek She had a stitch in her side and her legs were burning, but Dylan barely noticed. Her every thought was…